Over 40 participants took part in community dialogues hosted at UNDP headquarters in New York City from September 18th through the 23rd. In conjunction with the 2014 Equator Prize Award Ceremony, this six-day event drew together leaders of local and indigenous organizations from 23 different countries. Participants enjoyed the opportunity to share best practices with one another as well as gain new skills during workshops led by Oxfam, UN-REDD, GEF and other guest speakers. Follow the links below for coverage of individual sessions.

Day 1 - Welcome and Introduction to the Equator Initiative

The capacity building workshop series for the 2014 Equator Prize award winners began early Thursday morning with facilitators Esther Mwaura and Mohamed Arguine welcoming the group. Participants were asked to introduce themselves to one another and offer a brief summary of the work of their organization. he second session of Community Dialogues, titled Messaging with Impact!, was designed to provide the participants with a general background of the Equator Initiative and UNDP, as well as to discuss how the winners might maximize their opportunities to share their messages on an international stage. 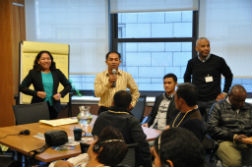 Representatives from Rare, Divina Hojas-Lade and Japy Silapan led a discussion on the importance of social marketing and education and outreach as a component of conservation activities. Participants in the community dialogue were presented with a series of actions that they had to identify as a form of knowledge, an attitude, etc. in order to help conceptualize how the process functions.

Three more participants gave their elevator pitches during this session. This included representatives from Chile, Ecuador, and Central African Republic. Following the elevator pitches presentations, Mirna Cunningham, the Indigenous Adviser to the President of the General Assembly, spoke to the participants about the relationship between indigenous peoples and the United Nations. She described the process indigenous peoples have undertaken to gain voice at the UN.

The community dialogue moderators, Esther Mwaura-Muiru, Mohammed Arguine, and Alejandra Pero invited participants to engage in a verbal reflection of the award ceremony. Alejandra Pero then invited participants to consider how the lessons they had learned in the days prior would inform their continued work. Leaders of the different thematic groups presented their findings on how to build a future platform. The groups agreed that the prize presents the responsibility to build awareness of successful efforts to mitigate climate change upon returning home.