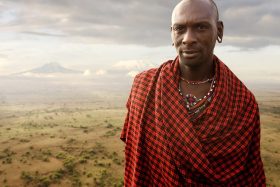 This year we’re celebrating the 10th anniversary of the adoption of the UN Declaration on the Rights of Indigenous Peoples, a declaration that provides a universal framework for the dignity and wellbeing of indigenous peoples everywhere.

In recent weeks we’ve marked some other important milestones for planetary wellbeing. One was the 47th anniversary of Earth Day, a day where communities around the world gather to bring awareness of the importance of environmental stewardship. Another was the 1st anniversary of the landmark signing of the Paris Agreement, where the world’s governments formally agreed to take urgent action on climate change.

All three anniversaries are interlinked; there is a growing understanding that indigenous lands and waters represent 80 percent of the world’s biodiversity, that indigenous peoples are effective stewards of these areas, and that these ecologically intact areas of the earth are a vital strategy for tackling climate change. In short, if we are to achieve the Global Goals for sustainable development by 2030, we must recognize, celebrate, advance and safeguard the rights of indigenous peoples to govern their lands and waters.

The Equator Initiative, a UNDP-led partnership, is celebrating 15 years of doing just that. We identify and celebrate examples of local and indigenous communities who are working to protect, restore and sustainably manage their lands and waters, and to safeguard their rights. Here are two examples.

The first is the indigenous Manquemapu community in Chile, which is protecting local forests and marine resources from overexploitation. The community’s mapping and zoning efforts have allowed them to promote a more sustainable management of marine resources, while banning the entry of large, for-profit entities such as commercial salmon farming operations. The community revitalized the sustainable harvest of traditional foods such as seaweed, fungi, and molluscs to address health issues, while also empowering women economically. They also promoted the launch of the Mapu Lahual Community Parks Network – the first indigenous conservation area in Chile – and successfully lobbied the Chilean congress to designate a marine protected area along the Osorno coast.

The second is the Nguna-Pele Marine and Land Protected Area Network in Vanuatu, an example of a locally managed marine area. Like Manquempau, the area encompasses a network of both marine and terrestrial community-managed lands and waters. Drawing from the traditional practice of tabu area, or no-take areas, the indigenous community established marine closures with the objective of maintaining and conserving natural resources. The network also developed an innovative programme to protect iconic turtle species by encouraging traditional turtle hunters to conserve turtles for ecotourism purposes; hunters capture sea turtles alive and, for a fee, allow tourists to tag and release these turtles. As a result, communities have doubled household income, not by harvesting more natural resources but through traditional tabu practices and through ecotourism that protects sea turtle populations and increases fish diversity and abundance.

The multiplicity of customary and modern conservation approaches in Chile and Vanuatu provide evidence that conservation strategies are most successful when tailored to fit local needs. Moreover, their success highlights the importance of a more nuanced government policy approach that devolves natural resource management to indigenous peoples who are improving their livelihoods while protecting nature.

As indigenous peoples and policy makers celebrate the 10th anniversary of the UN Declaration on the Rights of Indigenous Peoples, we should remember and highlight Article 29 of this Declaration: “Indigenous peoples have the right to conservation and protection of the environment.” We should also remember that this is not only a fundamental right of indigenous peoples, but also one of our best hopes to achieving the Sustainable Development Goals for people, planet and prosperity.

Eva Gurría is a Programme Analyst of the UNDP’s Equator Initiative in New York.