The village community of Bigodi, near Fort Portal, western Uganda, straddles an eight kilometre stretch of papyrus wetland that is home to an abundance of wildlife. Eight primate species and more than 200 bird species draw tourists from neighbouring Kibale Forest National Park, for which the Bigodi swamp forms an important wildlife corridor. Through the work of Chama Cha Maendeleo Ya Vijiji Na Mazingira Cha Kibale (KAFRED, Kibale Association for Rural and Environmental Development), the community benefitted substantially from this ecotourism trade by establishing guided tours along a boardwalk through the wetlands, supplemented by the sale of handicrafts by the village women's group.

Sustainable management of the area was backed by the enactment of bylaws in 1995, developed in a participatory fashion with local government authorities. This process provided the legal foundation for the group's work in wildlife conservation and income generation that has benefitted the national park and local stakeholders in equal measure. 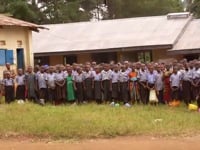