This collective brings together women’s groups from communities bordering the Popenguine Nature Reserve, a 1,000-hectare coastal reserve located in the Thies region of Senegal. Since the creation of the reserve in 1986 to prevent over-harvesting of marine resources and degradation of mangrove forests, the park’s authorities have sought to involve local communities in its management. Volunteer groups of women began forming to help reforest sections of mangrove forest in the late-1980s, eventually leading to the creation of COPRONAT in 1996.

Comprising more than 1,500 women organized in economic interest groups (Groupements d’Intérêts Economiques) in eight villages, the collective’s work has focused on rehabilitating ecosystems and resources that underpin the local economy. Its successes have included the creation of the co-managed Community Nature Reserve of Somone, and the operation of revolving credit funds that catalyze alternative livelihood activities such as ecotourism. 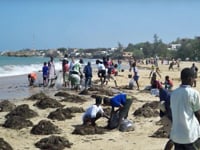