In 1975, Kahuzi-Biega National Park expanded from 60,000 to 600,000 hectares of forest in eastern DRC. The newly-incorporated lowland forest was home to the endangered Eastern Lowland gorilla (Gorilla Beringei graueri), as well as many indigenous Batwa communities. These communities were forcefully relocated by the expansion of the park, depriving them of a source of local livelihoods, food, and cultural heritage. The result was widespread poaching within the park's boundaries that defied official attempts at enforcement.

Since the early 1990s, however, the Fondation Pole Pole has pioneered an innovative scheme of giving poachers training in becoming artisans, bringing in an average income of USD 30/month for those involved. The promotion of other alternative livelihood activities around the park has helped to slowly turn the tide: between 2005 and 2007, human incursions within the habituated gorillas sector of the park fell by 12 per cent. 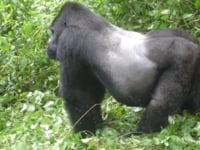