Fundación San Crisanto (San Crisanto Foundation) focuses on mangrove restoration and flood prevention in a region that consistently faces heavy rainfall and flooding. Since the Foundation's establishment, over 11,300 metres of canals have been restored, and 45 cenotes have been delisted and rehabilitated. As a result, flood risk is reduced and populations and diversity of endemic wildlife in the cenotes and mangrove forests have increased. Restoration efforts have generated 60 jobs and local household incomes have increased substantially.

To complement to its restoration efforts, the Foundation undertakes community education and awareness-raising, emphasising the value of wetland and mangrove conservation for local livelihoods and as a natural buffer against floods. 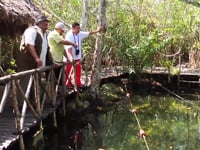