For over 400 years, the grasslands in the Guassa area of Menz in Ethiopia's central highlands were governed under a communal management system known as Qero. In this system, elected headmen determined when and for how long local people could harvest thatch grass and graze their livestock. Following the 1974 revolution and the collapse of the Qero system due to agrarian reform, the Guassa area suffered from year-round exploitation of the grasslands and subsequent degradation.

The Guassa-Menz initiative has worked since 2003 to revive the Qero system as a means of sustainably managing the area's valuable festuca grasses. Control of the grasslands was transferred to the Guassa Conservation Council, and has been complemented by modern governance elements, while community scouts have been trained in local bylaw enforcement. These successes resulted in the legal recognition of the Guassa Community Conserved Area in 2008. 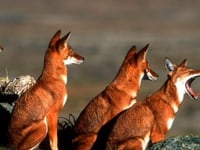