The Kerala Kani Community Welfare Trust is the result of an innovative partnership between a community of the indigenous Kani people, based in the Western Ghats, Kerala, and a private institute that has developed a medicinal product using local genetic resources and traditional knowledge. The discovery of the medicinal qualities of the Arogyapacha plant (Trichopus zeylanicus) was based on its local use for its anti-fatigue properties.

A long process of phytochemical, ethno-pharmacological and toxicological research by a local research institute led to the development of a herbal formulation for use in the production of a licensed herbal drug called 'Jeevani'. Revenues from the license to manufacture the drug and royalties from its sale have been divided between the institute and the Kani community; these funds formed the basis of the trust, established in 1997 to oversee their reinvestment in community welfare projects. 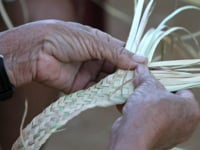