Kwetu Training Centre is based in Kenya's coastal district of Kilifi, where it uses a model demonstration site and extensive youth group engagement to promote sustainable environmental management of the coast's mangrove forests. This has incorporated voluntary reforestation efforts and the development of silviculture activities based around the mangrove ecosystems, such as crab farming, bee keeping and ecotourism. To this end, the centre has recently constructed a boardwalk through the local mangrove forests.

As local illiteracy rates are high, Kwetu uses innovative methods such as dance, drama, and music to convey conservation messages to local communities, and especially youth, while the group also runs a campaign to raise HIV/AIDS awareness. Its role as a critical support system for local initiatives has resulted in widespread impact along the coast, including the planting of more than 190,000 mangrove seedlings since 2007. 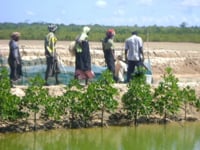