Facing a proposal by the Brazilian government to build a large dam complex on the Tapajós River that would submerge their vast territories, which span one million hectares of primary rainforest, the Munduruku of the Brazilian Amazon formed a resistance movement called Ipereg Ayu. Ipereg Ayu, in local language, means “I am strong, I know how to protect myself”.  Designed to safeguard the Amazon rainforest and protect the rights of the Munduruku people, the movement has helped to demarcate traditional territories, protect indigenous lands from illegal logging and mining, and create platforms for the Munduruku people to exchange experiences, knowledge, and best practices. The focus on territorial defense and resistance to destructive projects has not only empowered a broad segment of the Munduruku's 13,000 people, but also encouraged greater organization among the region's communities to stand as one against common threats and in favor of sustainable, culturally appropriate development.  In addition to successfully demarcating the Sawré Muybu territory, which created a political imperative for the Brazilian government to permanently protect Munduruku lands, the movement was the driving force behind a groundbreaking protocol on the right to free, prior, and informed consent. 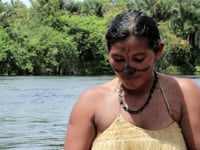