Programa de Campesino a Campesino has operated throughout Nicaragua since the post-war period of the early 1990s, as part of the worldwide Via Campesina movement which advocates for food sovereignty, agrarian reform, and democratic governance of food production systems.

The Farmer-to-Farmer Program in the northern municipality of Siuna is one of sixty-five such programs in Nicaragua which provide technical assistance to small-scale agricultural producers. The network began its work in 1992 with the goal of controlling the rapidly expanding agricultural frontier within the Bosawás Biosphere Reserve, while aiming to enhance food security, increase household incomes, and strengthen regional governance throughout Nicaragua's newly designated North Atlantic Autonomous Region. Three hundred volunteer extension officers work in over 80 communities and serve more than 3,000 subsistence farming families. 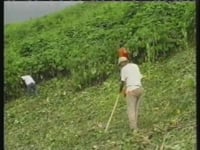