In the midst of armed conflict, the Inga indigenous peoples of Aponte – a population of 3,600 – successfully fought to recover their sovereignty and rights over their 22,283 hectares of ancestral territory. The group brokered a groundbreaking agreement with the Government of Colombia to reframe a national program designed to pay indigenous peoples to clear drug plantations from their land. The Inga of Aponte negotiated to receive a communal fund to support the entire community in their work to rid the territory of the armed guerillas, paramilitaries, and drug-trafficking groups that had between 1986 and 2004 violated their territorial rights, degraded local ecosystems, and stymied sustainable development. Following expulsion of these groups, the Inga people set aside the majority of their land as a 17,500 hectare sacred area. The community organized themselves around a local governance model that is based on shared a vision of justice and collective action on health, education, community services, ecosystem restoration, and sustainable livelihoods. At the same time, the group created the Court of Indigenous Peoples and Authorities from the Colombian Southwest, designed to support other indigenous peoples in reclaiming their ancestral territories and combatting drug trafficking. 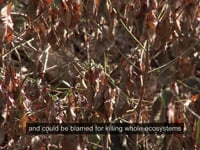