The Equator Prize 2015 Award Ceremony was held as a high-level contribution to the historic United Nations Framework Convention on Climate Change 21st Conference of the Parties (UNFCCC COP21) held between 30 November and 12 December 2015 in Paris, France. The goal of the conference was to convene nearly 200 governments from around the world to agree on a binding framework to address climate change.

It was against this backdrop that more than 1,600 people –heads-of-state and ministers, ambassadors, global business leaders, celebrities, environmental activists, thought leaders, media, and indigenous peoples representatives – came together to celebrate the achievements and innovations of indigenous peoples and local communities, namely the 21 recipients of the Equator Prize 2015. The winners, who were selected from a record-breaking 1,461 nominations from around the world, were honored for their remarkable achievements in tackling climate change using innovative measures to reduce poverty, protect nature and strengthen resilience.

To open the evening, Alec Baldwin said, “I have been a longtime advocate for climate action. And it is so thrilling to be here at a moment when the change we so desperately need finally seems to be within reach. It is encouraging to see political will catching up to what the science and community voices have been telling us for years – climate change is happening and we need decisive action. Many prizes are awarded to individuals – the Equator Prize, however, is about collective action and community achievement. It is about people coming together to address common challenges. The winners we will meet tonight are real heroes and we’re here to celebrate and honor them and their communities.”

In her opening remarks, Helen Clark said, “Climate change affects all of us—rich and poor, developed and developing, urban and local. It is truly an all-of-society concern that requires an equally all-of-society approach. The people and groups here tonight have shown that action and innovation against climate change can and does happen at all levels, and this should be encouraged, supported and scaled up.” Clark also announced the launch of a new Equator Initiative publication, “Climate Solutions from Community Forests: Lessons from Indigenous and Community-Based Forest Management.” The book, which can be downloaded here, is based on the lessons learned from previous Equator Prize winners in protecting, restoring and sustainably managing forests.

In a coastal region of Honduras that has some of the highest rates of poverty in Latin America and that is facing severe environmental threats from the shrimp farming, sugar cane, and commercial fishing industries, Comité para la Defensa y Desarrollo de la Flora y Fauna del Golfo de Fonseca (CODDEFFAGOLF) has been a force for positive change over the last 20 years.
Read More →

FORMADAT: The Alliance of the Indigenous Peoples of the Highlands in the Heart of Borneo

This trans-border indigenous peoples alliance came together in 2004 to build on the shared historical and cultural bonds between the Lundayeh, Kelabit, Lun Bawang, and Sa'ban peoples living in the highlands of the heart of Borneo. The Alliance of the Indigenous Peoples of the Highlands in the Heart of Borneo (FORMADAT) aims to integrate conservation...
Read More →

Formed in response to a 1998 Lashihai dam project that flooded large areas of farmland and left the Yi indigenous people displaced, Green Watershed has become a model of indigenous self-organization and participatory watershed management. The group responded to displacement by founding four autonomous organizations for sustainable resource management...
Read More →

Instituto Raoni is the organizational face of the Kayapó, a Brazilian indigenous group that is leading the fight against unfettered deforestation of the Amazon. The group uses an innovative media strategy called the 'video warriors' project to document illegal logging in their territory and increase accountability in the most remote regions of the Amazon rainforest.
Read More →

On an archipelago off the east coast of Sumatra that has been devastated by tin mining and unmitigated industrial development, Kelompok Peduli Lingkungan Belitung is working to rehabilitate, protect, and sustainably manage coastal resources. Community management of coral reefs, mangroves, fishing zones, and tropical forests has led to improved livelihoods...
Read More → 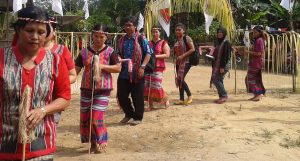 Komunitas Adat Muara Tae is a community of Dayak people in Kalimantan fighting for the protection of their customary forests.  Of their original 11,000 hectares of land, only 4,000 hectares remain, the rest having been lost to illegal clear-cutting by palm oil, mining, and logging companies. Through community mapping, demarcation of their traditional territory...
Read More →

Started in 2005 to improve recognition of indigenous pygmies rights in Congolese legislation, La Dynamique des Groupes des Peuples Autochtones is a network of 43 indigenous peoples organizations from across the Democratic Republic of Congo (DRC). The group has lobbied for a legal framework in the DRC that promotes and protects the rights of indigenous peoples.
Read More → 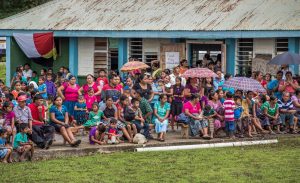 This coalition of Maya organizations and leaders collectively work to promote the long-term wellbeing of the Maya people and to defend collective rights to their territories. The alliance achieved a landmark legal victory in 2015, which affirmed that the 39 Q’eqchi and Mopan Maya indigenous communities of southern Belize have rights to the lands that they have historically used and occupied.
Read More → 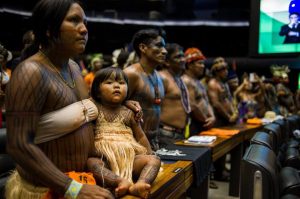 Facing a proposal by the Brazilian government to build a large dam complex on the Tapajós River that would submerge their vast territories, which span one million hectares of primary rainforest, the Munduruku of the Brazilian Amazon formed a resistance movement called Ipereg Ayu. Ipereg Ayu, in local language, means “I am strong, I know how to protect myself”.
Read More → 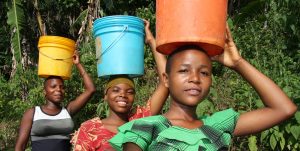 An indigenous federation that represents the Miskitus of the Honduran Mosquitia, MASTA works to protect indigenous territorial rights and culture, strengthen local governance and natural resource management, and improve regional health and education systems. The group protects a large part of the remaining intact rainforest in Honduras, approximately 1.2 million hectares or 7 percent of the national territory.
Read More →

Extreme weather and droughts have historically brought the Borena and Gabra pastoral tribes into conflict over pasture land, water, and natural resources. The Oromia Pastoralist Association (OPA) was created to facilitate the cross-border mobility of pastoralist tribes between Southern Ethiopia and Northern Kenya and is helping to address land disputes, resource conflicts, and the barriers these vulnerable groups face to coping...
Read More →

Working to protect a 500,000-hectare forest in the Cambodian lowlands – the largest primary lowland evergreen forest remaining in the country – Prey Lang Community Network is an alliance of indigenous Kuy communities that is using communications technologies to document forest crime. Since 2007, the network has advocated against illegal logging and large-scale, government-sanctioned land grabs for mining, agribusiness...
Read More →

A federation of Wapichan communities in Guyana, South Central People's Development Association has developed an innovative land use plan and a 'living digital map' of their traditional lands to promote secure land rights and socioecological resilience. Community mapping teams create territorial maps that are used to make land claims and devise collective land use...
Read More →

Working in the areas surrounding Lake Urmia – the world’s second largest hyper-saline lake and the largest inland wetland in Iran – the Umbrella Group of Naghadeh NGOs addresses water management issues that include wetland restoration, adaptation to droughts, farm irrigation, and sedimentation in canals. Although previous efforts to restore the rapidly disappearing Lake Urmia focused on the lake itself, this initiative took...
Read More → 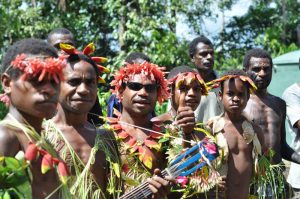 Developed in response commercial logging pressures and a lack of public services, the Wanang Conservation Area is an alliance of ten indigenous, rainforest-dwelling clans that together protect 10,000 hectares of forest for biodiversity research, carbon storage, and sustainable livelihoods. The initiative maintains a 'forest dynamics plot', where they have planted more than 280,000 trees to study their responses to changing climatic conditions.
Read More →

In the midst of armed conflict, the Inga indigenous peoples of Aponte – a population of 3,600 – successfully fought to recover their sovereignty and rights over their 22,283 hectares of ancestral territory. The group brokered a groundbreaking agreement with the Government of Colombia to reframe a national program designed to pay indigenous peoples to clear drug plantations from their land.
Read More →

World-renowned anthropologist Jane Goodall, spoke of the need for the world to reevaluate its history of consumption and its impact on the environment. “How come the most intellectual creature to ever walk the planet earth is destroying its only home? I think there is a disconnect between the very clever brain that is capable of so many extraordinary achievements and the human heart – that’s love and compassion. So many people in the developed world have lost the wisdom of the indigenous people where you make a decision only after considering how will this decision affect our people generations ahead. We’re saying, ‘How will this affect me now or the next shareholder’s meeting?’ I truly believe that we will only achieve our true human potential when head and heart work in harmony.” To watch Jane Goodall give the closing remarks, please click on the image below.