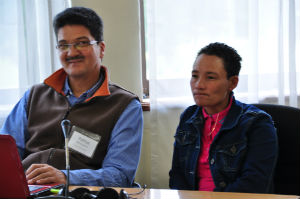 After the brainstorming session, all workshop attendees came together for a discussion, enabling all participants to share their ideas and inputs for the community statement with each other.

Prepping for the Equator Prize for SLM in SSA Award Ceremony 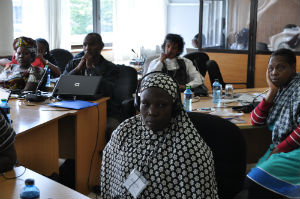 The participants were divided into groups by language and were assigned a segment of the community statement to be composed by them.

The Swahili group worked on the introduction, which covered where they were from and the work they did. The French and English groups worked on the group's vision, presenting the accomplishments and commitments of the winning initiatives. After an hour’s discussion, participants were also asked to present their work and to read the proposed statement out loud. After friendly discussion, other participants voiced their opinions and recommended changes to the text. 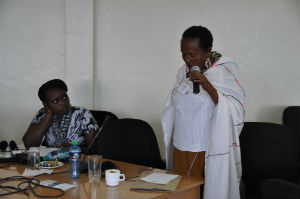 After all the required changes were made and agreed upon by everyone, the final version of the community statement was ready  for the award ceremony. The final statement was then translated into all three languages.

As the day concluded so did the capacity building workshop; participants were therefore asked to reflect on their experiences from the workshop. Most participants replied that they had benefitted a lot from this experience, had gained great knowledge, and were looking forward to sharing all they had learned with their community.

Participants and journalists were taken to the Kikuyu Escarpment Forest in the Rift Valley for a day trip. David Kuria, founder and coordinator of KENVO, a local organization which operates in this area, facilitated this trip.

The first stop of the trip was the View Point, a location that offers a breathtaking view of the Rift Valley. From this vantage point, the participants were able to see the transitioning border on the land surface, between shrub land and semi-arid land.

The next stop was the KENVO office, where participants were introduced to journalists, from their respective countries, who were interested in hearing their story. The group was then briefed on KENVO’s activities for conserving natural resources at the Kikuyu Escarpment Forest and visited a nursery maintained by KENVO, while learning about its practices. The nursery visit was followed by a tour of a  piece of reforested land where participants were informed about reforestation efforts and commercial agro-forest nurseries.