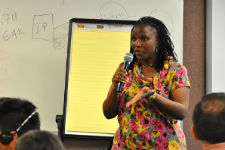 The morning began with another round of congratulatory applause after the Equator Prize Award Ceremony which took place the evening before. All participants were informed that they would receive a USB in the coming weeks with photos from the event and one another’s presentations. Tickets to the World Conference on Indigenous Peoples were provided to all who wished to attend that afternoon.

The community dialogue moderators, Esther Mwaura-Muiru, Mohammed Arguine, and Alejandra Pero invited participants to engage in a verbal reflection of the award ceremony. Awardees were pleased with the success of the event but wished that there was more time to explain the work of each of their projects to increase awareness. Leydy Pech Martin of Koolel Kab / Muuch Kambal in Mexico reflected on the award ceremony saying “we were brothers and sisters despite language barriers; we were raising our voices as one. This is just the beginning to do bigger things.” Maximiliano Tanimuca Letuama of Asociación de Capitanes Indígenas de Yaigojé Apaporis in Colombia proudly stated that “the event has reached a level to inform world leaders that they cannot exploit but it is time to live sustainably.” Participants spoke with gratitude for the opportunity to learn from one another and return home with a stronger tool kit to increase their organizations’ capacity. Violeta Condoy Miranda of Asociación Comunitaria Bolívar Tello Cano in Ecuador told her fellow winners “I’m going to take you with me in my heart back home and hope to create new initiatives based on lessons learned from you.”

All participants were invited to fill out a written evaluation at the end of the session. Eileen De Ravin, Manager of the Equator Initiative, informed participants that national UNDP offices in each country will be encouraged to host a ceremony in their honor in hopes of increasing national awareness of their important work.

Alejandra Pero then invited participants to consider how the lessons they had learned in the days prior would inform their continued work. Participants split into thematic groups to discuss platforms for future growth and accountability.

Leaders of the different thematic groups presented their findings on how to build a future platform. Tsitsi Wutawunashe of the Makoni Organic Farmers Association in Zimbabwe shared her group’s desire for a mechanism by which to continue dialogue amongst winners. Proposed mechanisms included an email network, shared googledocs, or a quarterly report of new achievements and challenges. Leydy Martín of Koolel Kab / Muuch Kambal in Mexico noted the need for acquiring translation services in order to effectively communicate with new colleagues from other nations. Winners also discussed the hope to visit one another to witness and learn from each other’s work first hand. Several groups voiced the hope for the creation of Equator Initiative regional offices with the capacity to compile and disseminate regional best practices as well as offer invitations to relevant conferences and seminars.

The groups agreed that the prize presents the responsibility to build awareness of successful efforts to mitigate climate change upon returning home. One group presented the concept of an advisory council formed amongst winners charged with scaling their organization’s voice throughout their nations. Zafer Kızılkaya of the Mediterranean Conservation Society in Turkey stated that as leaders they must share their new skills with other local organizations. He also called groups to identify skills and resources among their staff and volunteers to discover capacity already within grasp and build self-sufficiency.

John Scott, Programme Officer for Traditional Knowledge with the Convention on Biodiversity, was introduced to the group and stated “we’re attempting to create an international network to share traditional knowledge on sustainability and enhance local voice.” He celebrated that more indigenous people than ever have been invited to attend the upcoming World Parks Congress taking place in Australia in November and stated his hope that Equator Prize winners will join him there.

The morning concluded with final remarks by Sally Timpson, Global Manager of the GEF SGP, who told the winners “you have added so much to our work. Thank you for your input and your exchanges with one another. Please continue to participate actively in the Equator Initiative family and return again with new ideas.” The group then filled out evaluations and watched videos of one another’s projects during lunch. Participants left to prepare for their departures or attend the World Congress on Indigenous Peoples.