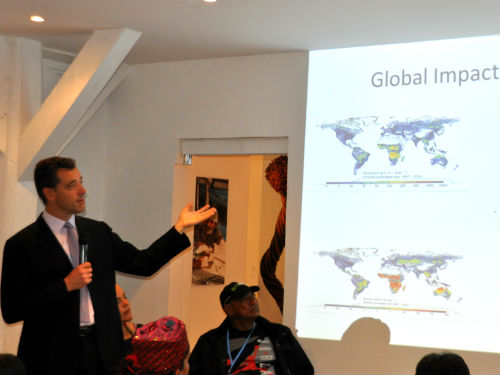 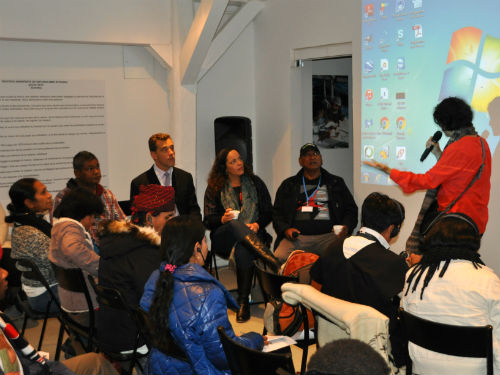 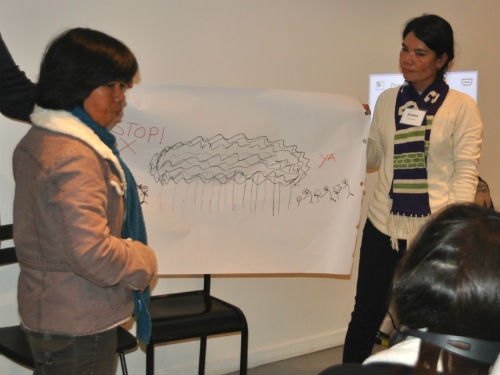 Nomi & Ariana from Indonesia assist in the presentation

The second day of dialogues held at L’Espace Krajcberg commenced with guests from the Savanna Burning Initiative. Mr. Nolan Hunter, CEO of the Kimberley Land Council (KLC), described their cultural enterprise model in Australia including a ranger program in which climate change impacts are monitored and documented. Ariadne Gorring, Strategic Business Development Officer for KLC, highlighted the role of government partnerships to support sustainable land management by detailing their work to measure carbon storage in trees, calculate the amount of land saved through controlled burns, and generate carbon credits then sold to the Australian government. Sam Johnston of UN University explained that the Savanna Burning Initiative is born of a long history of indigenous people managing their landscapes with fire until it was banned under colonization. Reintroducing these practices has proven successful in Australia and the initiative seeks to expand the use of traditional fire management to support both culture and environment. Karina de Oliveira Paco from Brazil explained her community’s struggles with lumber industry burning to make soybean plantations and their attempt to film elders’ use of traditional burning methods to ensure their sustainability.

Facilitator Japy Silapan, shared lessons from his work at RARE with the mission to “inspire change so people and nature thrive.” He named people as both the cause and the solution of climate change and discussed the importance of shifting behavioral norms. Applying behavioral change theory to natural resource management, Mr. Silapan explained the process from knowledge yielding communication which can remove barriers and spark behavorial changes creating threat reductions for the environment. He then guided small groups in an activity in which they created marketing material for an issue they seek to tackle. Following their presentations of t-shirts, posters and other potential tools, Mr. Silapan offered methodology advice on social marketing.

To assist in the honing of community statements, participants viewed videos of past winners’ statements at Equator Prize Award Ceremonies. The clusters edited their statements and provided printed copies to other groups for peer revision. While half of the group participated in the community dialogues, one member from each initiative attended the Climate Generations Spaces at COP21, a space open to the public and facilitated by civil society actors. Participants attended the first events hosted at the Indigenous Peoples’ Pavilion.