Opening of the Community Palli 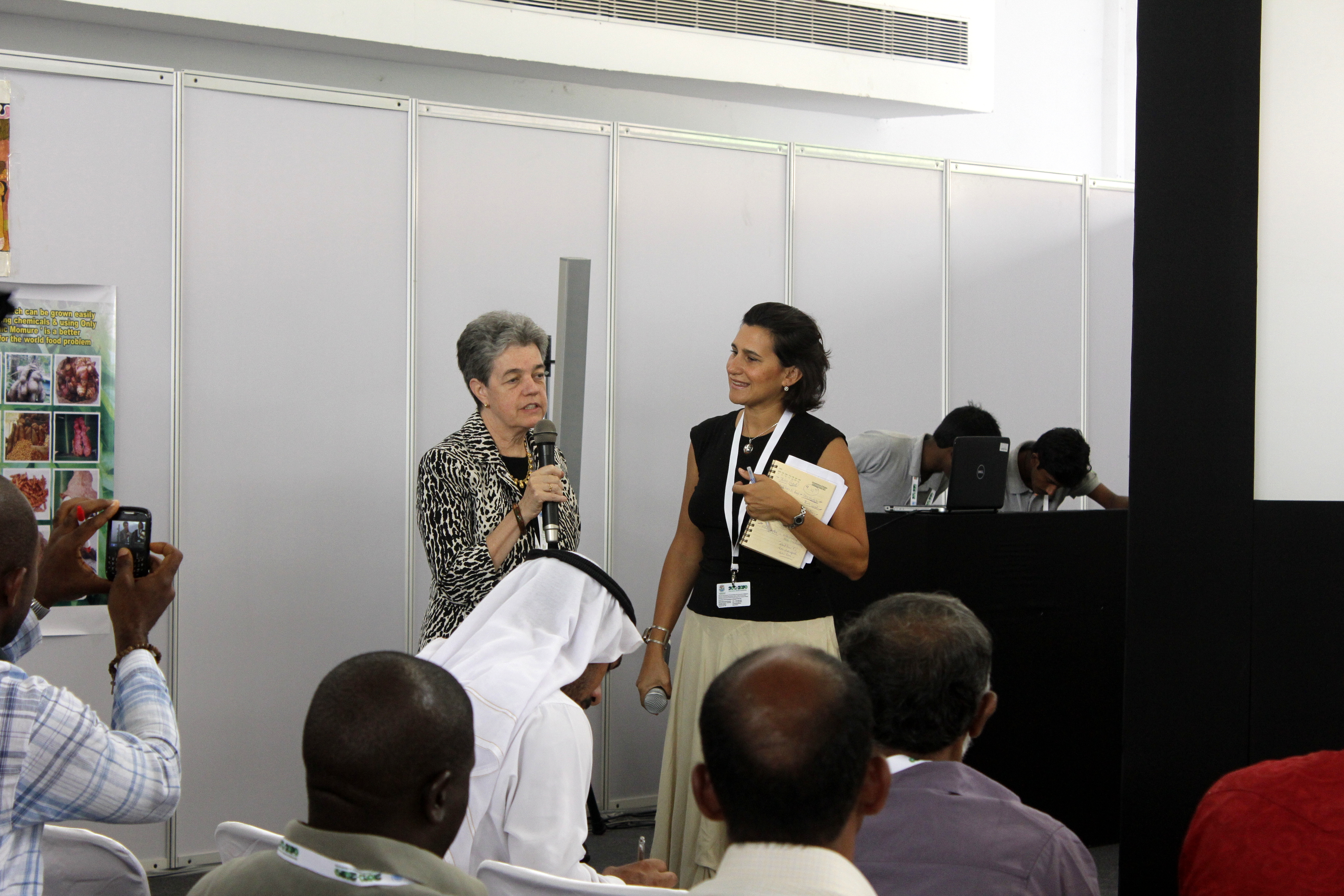 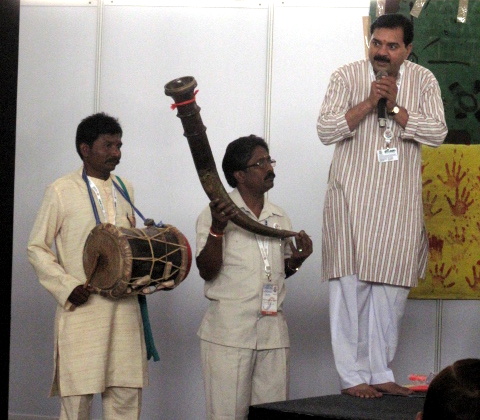 The Community Palli (named for the word for “village” in Telugu) began on the morning of Tuesday 9 October 2012, on the second day of the CoP 11 to the Convention on Biological Diversity in Hyderabad, India. Representatives from across the world – from as far as Brazil, Egypt, Kenya, Indonesia, Benin, Nigeria, and Burkina Faso, and more “locally” from Bangladesh, Sri Lanka, and across India – had gathered to share experiences, discuss common successes and challenges faced, and interact with the wider debates taking place during the CoP 11.

The session began with an opening blessing offered by a local priest, accompanied by music. Together with Eileen de Ravin, the priest then lit a candle, signifying the official opening of the Community Palli. This was followed by introductions by all of the participants and from Ms. de Ravin, manager of the Equator Initiative, who welcomed everyone and briefly described the evolution of the initiative since 2002. This included the series of community dialogues held around the world, of which the Community Palli was the fourteenth. These dialogues have brought together over 500 indigenous and local representatives to share experiences, learn from one another, and inform wider debates alongside international forums. This work has more recently been supplemented by the publication of the Equator Initiative Case Study Database, covering all winners between 2002 and 2010, and The Power of Local Action: Lessons from 10 Years of the Equator Prize, based on analysis of these cases.

Alejandra Pero then initiated a discussion about the objectives for the Community Palli, including connecting with government delegations, participating in side events, sharing their best practices with other local representatives, and attending the CoP plenary sessions. Ms. Pero asked all of the participants to write three objectives on a piece of paper: these would be referred to in the second week as a means of evaluating the success of the Palli. 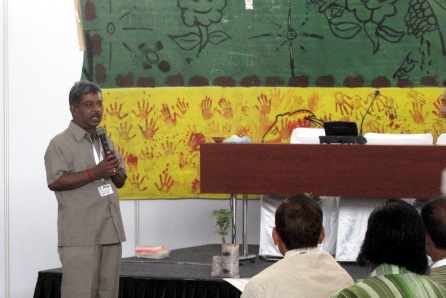 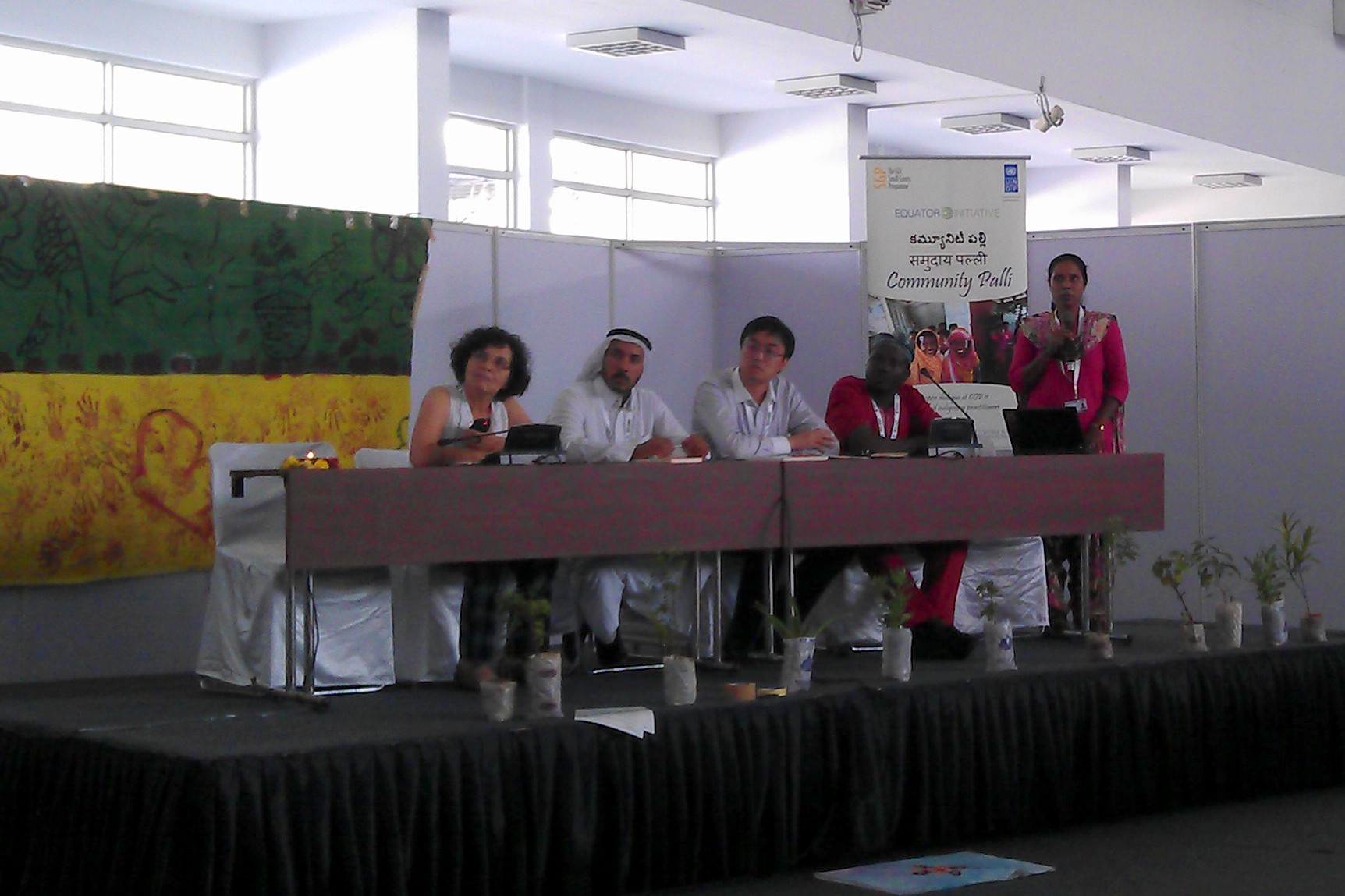 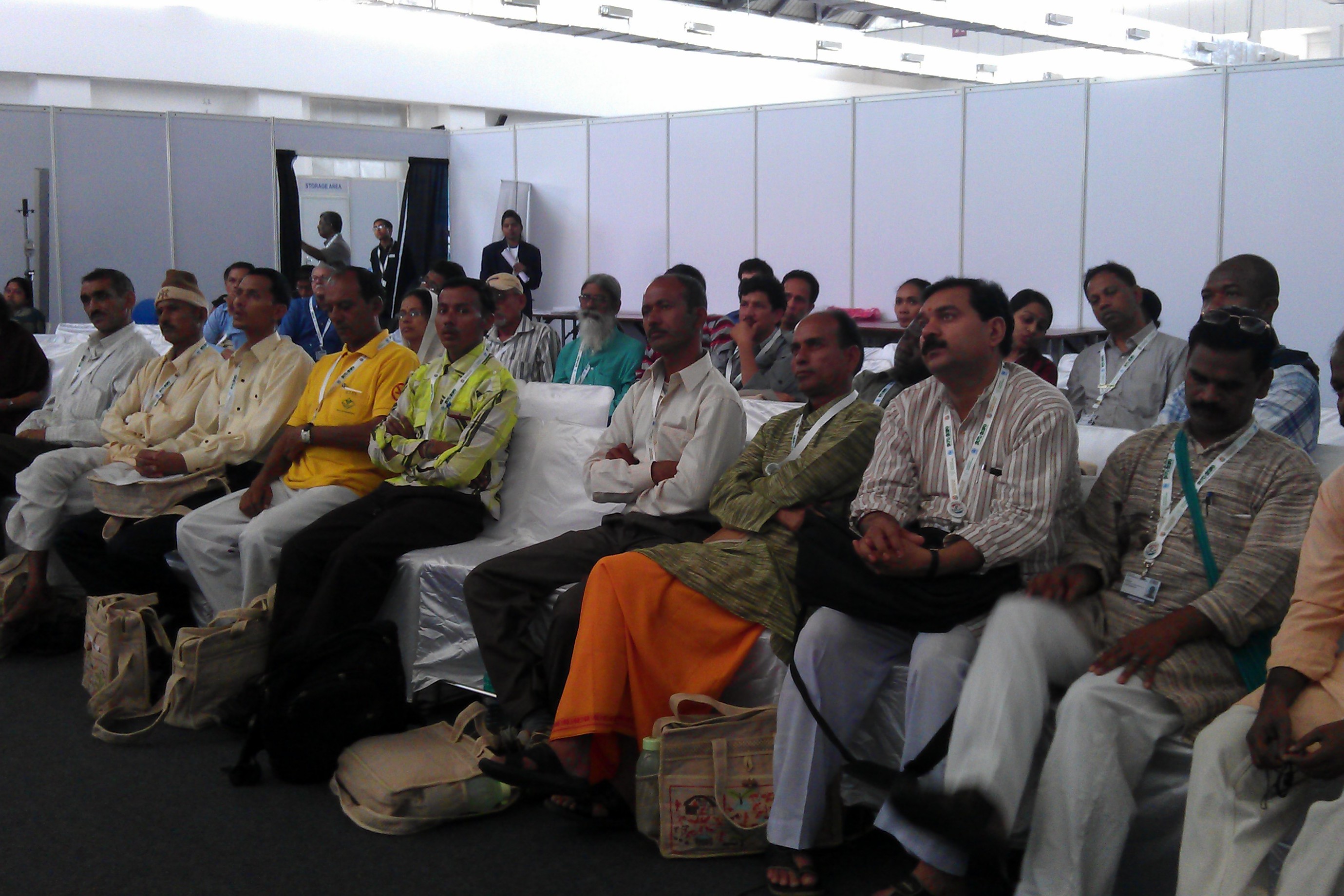 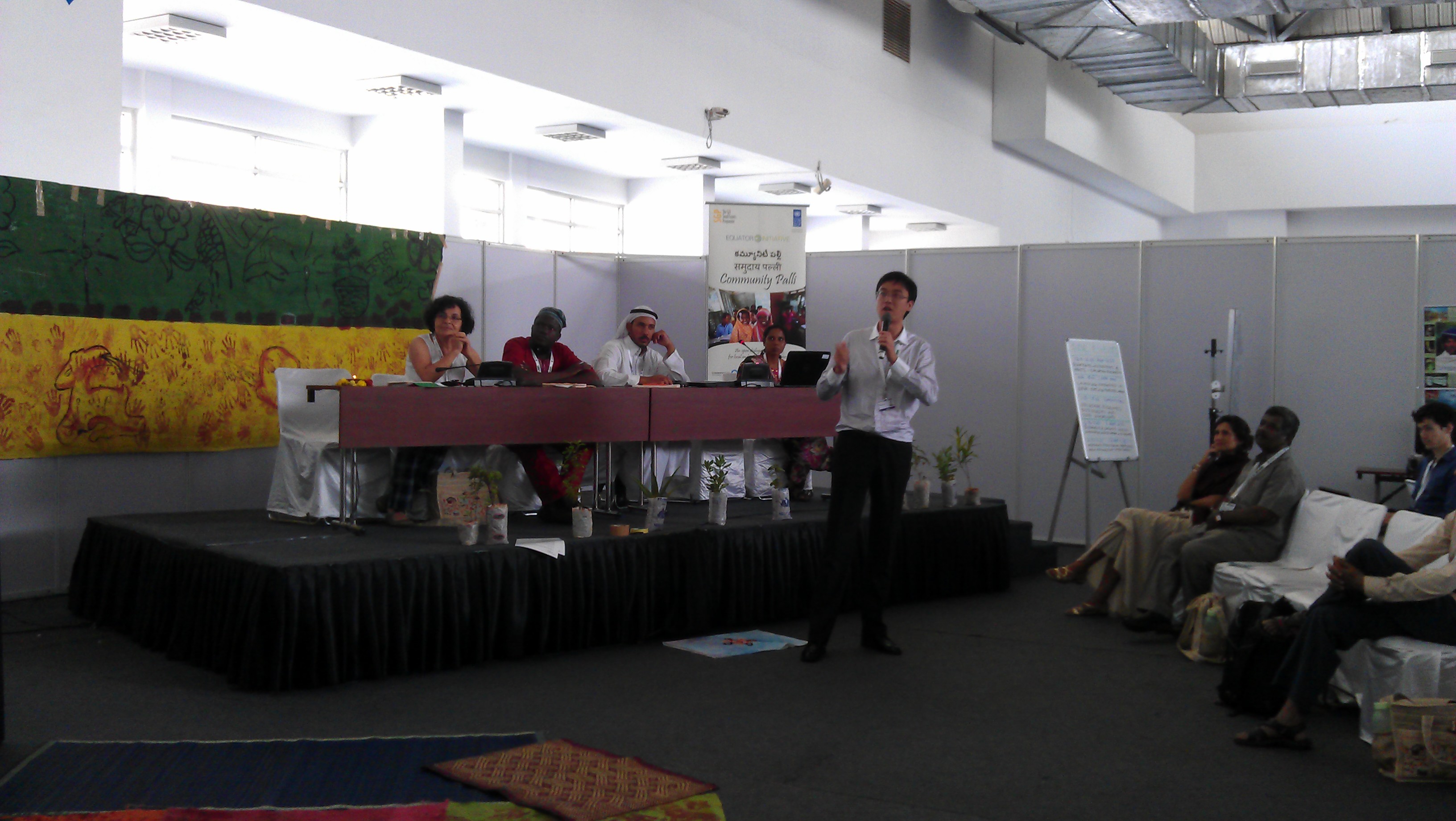 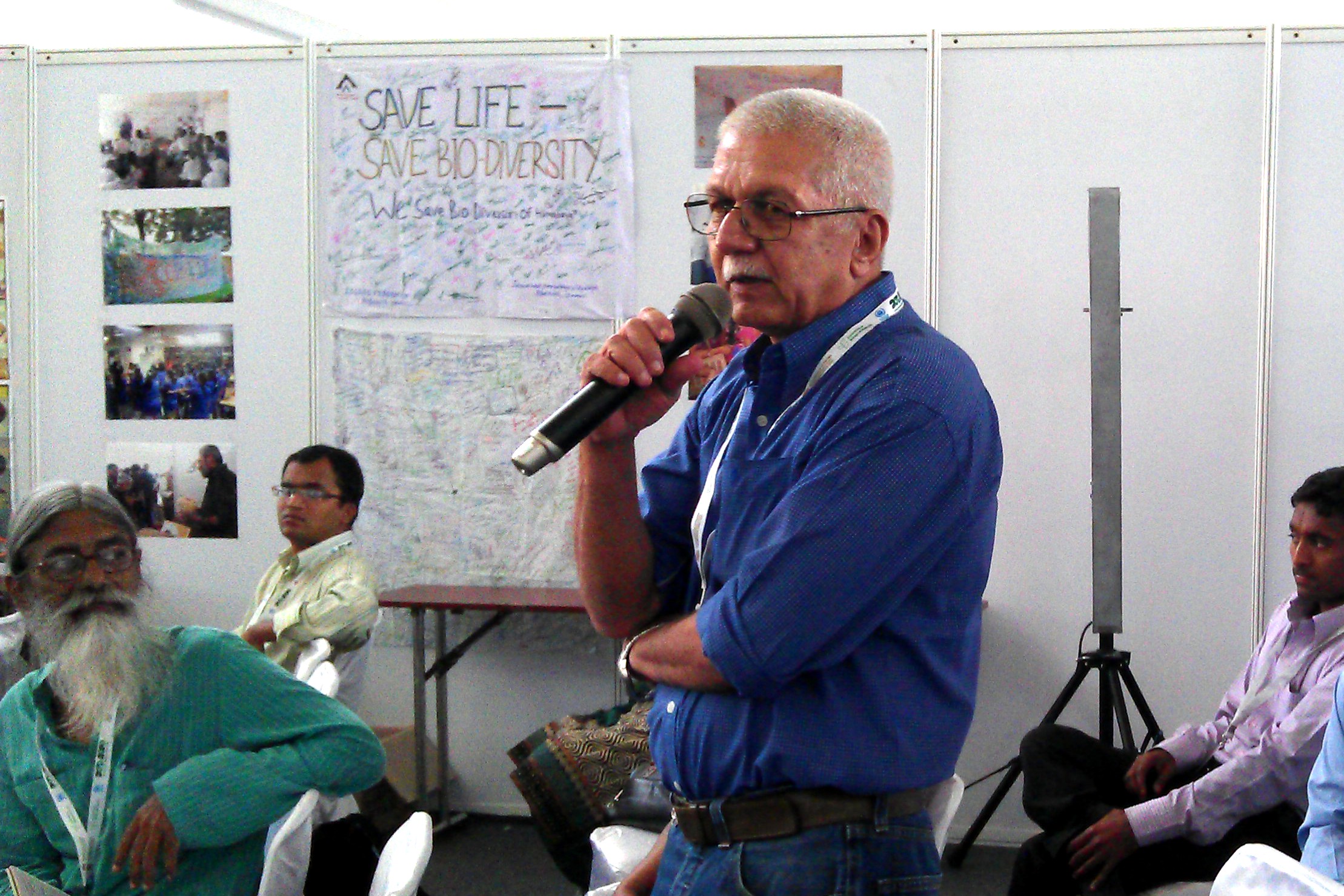 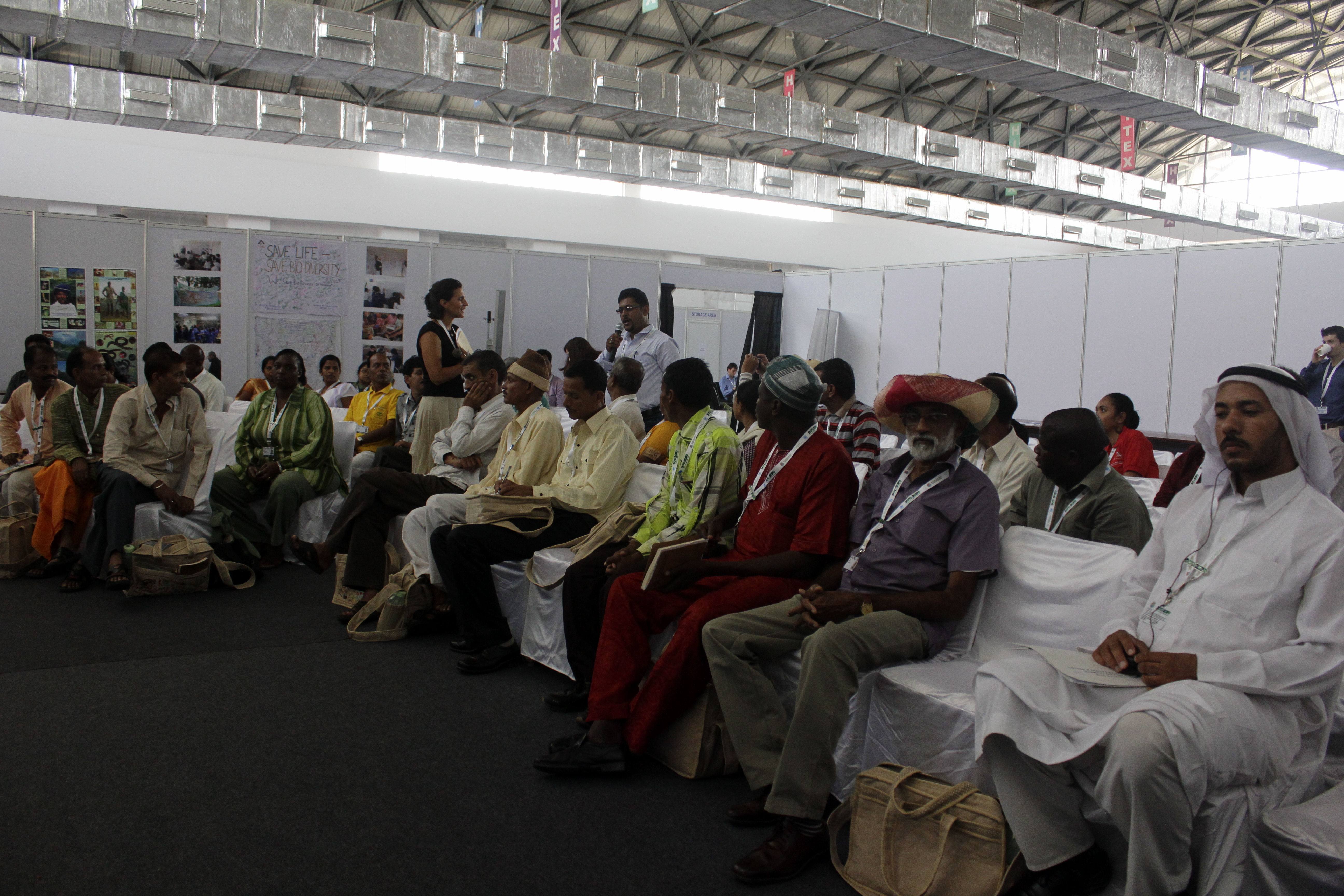 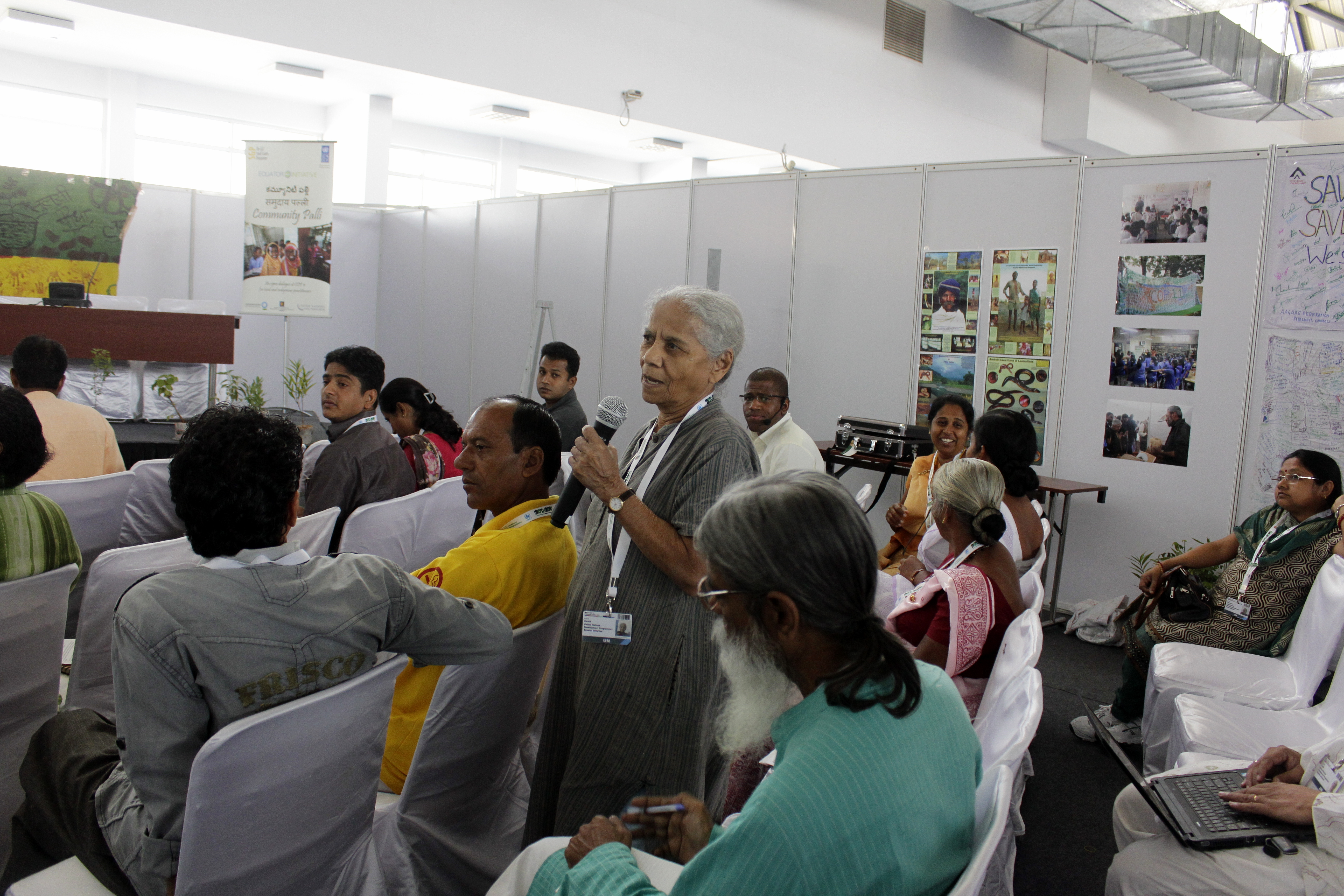 The first of the Equator Prize winner thematic workshops was on the role of medicinal plants conservation in supporting livelihoods and local wellbeing, with a focus on the policy conditions needed to scale up local success in this field. The session built on the success of the medicinal plants workshop held in Bangalore, at the Institute for Ayurveda and Integrative Medicine (I-AIM), October 1-5. The event was moderated by Govindaswamy Hariramamurthi (“Hari”), Assistant Director and Head of the Centre for Local Health Traditions at I-AIM, Foundation for Revitalization of Local Health Traditions (FRLHT.)

Hari introduced the speakers from Benin, Brazil, Egypt, China, and India, before showing a short film on the theme of "Farmers to Pharmacy" made by Sambandh, an NGO involved in medicinal plants conservation in Orissa. Hari also introduced five guiding questions for the discussion around the presentations, namely: What role can local governments play in helping communities conserve medicinal plants genetic diversity? What strategies have communities used to develop strategic partnerships? How do participants engage in networks to share knowledge? What specific strategies for medicinal plants cultivation have been successfully replicated? How do you feel CoP 11 can help support local action?

The first presentation came from Ms. Vaishali Gavandi, representing the Medicinal Plants Conservation Centre (MPCC), from Maharashtra state in India. The initiative is operated by Rural Communes, an environmental NGO based in Pune, and has been supported by FRLHT. Vaishali began her presentation by describing the establishment of 13 Medicinal Plant Conservation Areas in Maharashtra, each one comprising an average of 250-300 hectares of land. These sites play a key role in protecting the state’s rich medicinal plant diversity. Botanical surveys of the area have provided data for researchers: one such survey discovered a species – ceropegia odorata – which had previously been thought to be extinct for 25 years. Capacity-building initiatives have included the establishment of women’s self-help groups; a Village Biologist Training Program; and ecotourism guide training.

A central campus nursery has distributed almost twenty thousand plants to “forest herbal gardens” around member villages, while MPCC has worked with the National Medicinal Plants Board to develop demonstration gardens and nurseries for this work, which has also contributed to the development of herbal products, which are sold locally and exhibited in regional fairs and exhibitions. This diverse portfolio of activities has contributed to improved food security, agricultural innovation, biodiversity conservation, livelihoods development, and access to traditional medicine for rural communities.

A short discussion followed, in which the origins, evolution, and scaling of the initiative were discussed. Initially, the work was supported by both UNDP and local government authorities, thanks to a director of the centre’s involvement with the state forest ministry. This support, combined with that of Rural Communes and FRLHT, had been a prime factor in the initiative’s scaling-up to more than 10,000 villages across India. Along the way, the group’s successful “home herbal gardens” model had evolved into a “forest herbal gardens” concept – Vaishali explained that this model afforded members greater license to gather wild medicinal plants from forests, rather than being limited to home gardens.

Mr. Saidou Gnanando spoke on behalf of Réseau de Développement de Réserves Naturelles Communautaires (REDERC), from northern Benin. The initiative began with the creation of the Papatia Botanical Garden in 2001 with the aims of protecting local biodiversity and raising awareness on the need for conservation. The initiative has pioneered the cataloguing of traditional medicine practices: staff members go door-to-door to register traditional healers, record their specialties, and publish and share this information. The network has also helped healers to generate income by ensuring that they take payment before distributing medicine.

The groups has also worked extensively in environmental education, working through 13 networks of traditional healers and two pharmacies to promote traditional medicine, and linking village elders with local youth to promote the transfer of knowledge on traditional medicine to the younger generation. The initiative still faces challenges in encouraging the preservation of this knowledge, however – Saidou emphasized the need for international support from the CBD and UNDP to help improve the economic viability of traditional healing as a source of income.

A parallel experience of cataloguing traditional knowledge within a rural network came from Ms. Lourdes Laureano, who spoke about the Pacari Network’s efforts in the Cerrado region of Brazil. The initiative has supported the cultivation of medicinal plant species through a network of community pharmacies and the processing of plants into herbal remedies. The network has developed a unique system of documenting traditional knowledge called the “Popular Pharmacopoeia of the Cerrado”, which has involved the participation of more than 260 traditional health providers.

Ms. Laureano cited this documenting of traditional knowledge as a critical first step in preparing for the possibility of Access and Benefit Sharing systems, but also described a number of obstacles to this work. The lack of any comprehensive legislation recognizing traditional health practices has meant that the network has mobilized medicinal plant producers and local health practitioners to create self-regulating policies relating to the preparation of traditional medicines, safety and sanitary conditions for plant processing, and sustainable harvesting techniques.

More supportive national policies would better enable this work, while the CBD also has a role to play in facilitating workshops and knowledge exchanges targeted at building capacity on the provisions of international conventions, and ensuring the input of local practitioners to the development of these guidelines.

Mr. Khalil Soliman presented on behalf of the Medicinal Plants Association, St. Catherine, from Sinai, Egypt. The association works to conserve medicinal plants within the St. Catherine Reserve, supporting local Bedouin community members in the production and marketing of medicinal products, honey, and handicrafts. Organic and fair trade certification has underpinned these efforts, ensuring a higher price for products. Of the 300 members of the local community, 30% are women.

The initiative has brought together a range of government and international partners to advance progress towards a number of development goals, including empowerment of women, improvements in access to health, poverty reduction, and environmental stability. Mr. Soliman argued that the CBD can provide support for this work in the following key areas: promotion of community exchanges, attention to initiatives for women, support for existing training centers, and strengthening the capacity of local communities.

Mr. Jiawei Wu described the work of the Kangmei Institute of Community Development and Marketing, based in Chengdu, China. The institute has worked to preserve the area’s key medicinal species since 2005 as part of a wide portfolio of activities that also includes wildlife conservation – focused on the endangered giant panda – and livelihoods development. China has a long tradition of medicinal plants use, dating back at least 5,000 years; there are 37,500 wild plant species in China, including 11,146 medicinal plants and 67 endemic genera of medicinal plants. More than twenty-five species of medicinal plants are endangered; many more are Red-listed and under threat from over-use.

Before the initiative began its work, traditional medicinal plants in the mountains around Chengdu were unmanaged, leading to their over-exploitation. This was exacerbated by unpredictable price fluctuations for medicinal plant products, high variability in their quality, and the difficulty in tracing product origins. In response, the organization has developed a model using incentive-based approaches to encourage the sustainable harvesting of medicinal plants in the mountain region of the Yangtze River basin, where environmental conservation benefits habitats home to 80% of China’s wild pandas.

Participatory rural assessments and baseline surveys are undertaken with individual communities, followed by capacity building, selection of medicinal plants, and the creation of producers’ associations. Organic certification adds value to medicinal products: in the community of Daping, 26% of villagers harvest ten medicinal plants species between April and November.

Discussion involving all of the Community Palli participants focused on the use of certification schemes for processing of natural products, and issues involved in persuading local communities to adopt cultivation of medicinal plants as livelihood options. Jiawei noted that while organic certification schemes exist, there were no options for gaining sustainable certification for plant harvesting. Hari recommended that this be a focus for the CBD: creating a certification process for sustainable practices across the developing world to encourage better harvesting and higher prices for locally-produced products.

Vaishali discussed the reliance of the communities her initiative works with on traditional medicinal plants: when the project began 30 years ago, they surveyed the area and found which plants were being used for which health problems. They brought local practitioners and scientists together in workshops to find out what worked best. Hari noted that India was one of the first countries to implement the CBD, through the Biological Diversity Act in 2002. This has provided an institutional framework for communities to document their local knowledge and promote it through official channels: more than 500 clusters of villages across the country are documenting their practices in tandem with state biodiversity authorities.

18:15 – 19:45
Secretariat of the Convention on Biological Diversity

The first day of the Community Palli concluded with a side-event featuring a number of initiatives targeted at building the capacity of indigenous and local communities in preparation for the implementation of the Nagoya Protocol. These included the Indigenous Women’s Biodiversity Network for the Latin American and Caribbean Region (IWBN-LAC), in partnership with the CBD Secretariat: Florina López Miro presented on the network’s strategies for capacity building around these issues.

Damian Fernandes, of IUCN’s Regional Office for South America, described the work of a GEF Regional Project titled ‘Strengthening the Implementation of ABS in Latin America and the Caribbean’. Dominique Bikaba, meanwhile, formerly of Pole Pole Foundation (an Equator Prize 2006 winner), spoke to his experiences as a participant in Conservation International’s Indigenous Leaders Conservation Fellowship program. Finally, the audience heard a presentation on traditional knowledge and technology transfer as an alternative solution to climate change adaptation, based on experiences of a project in the Mayan Biosphere Reserve that brought together community-based organisations - Asociacion Ak’ Tenamit and Asociacion Sot’zil – the Guatemalan Ministry of Culture, the University of San Carlos, and the country’s National Council of Protected Areas.