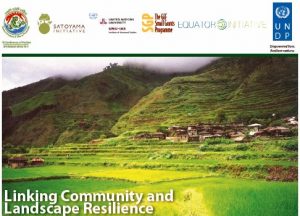 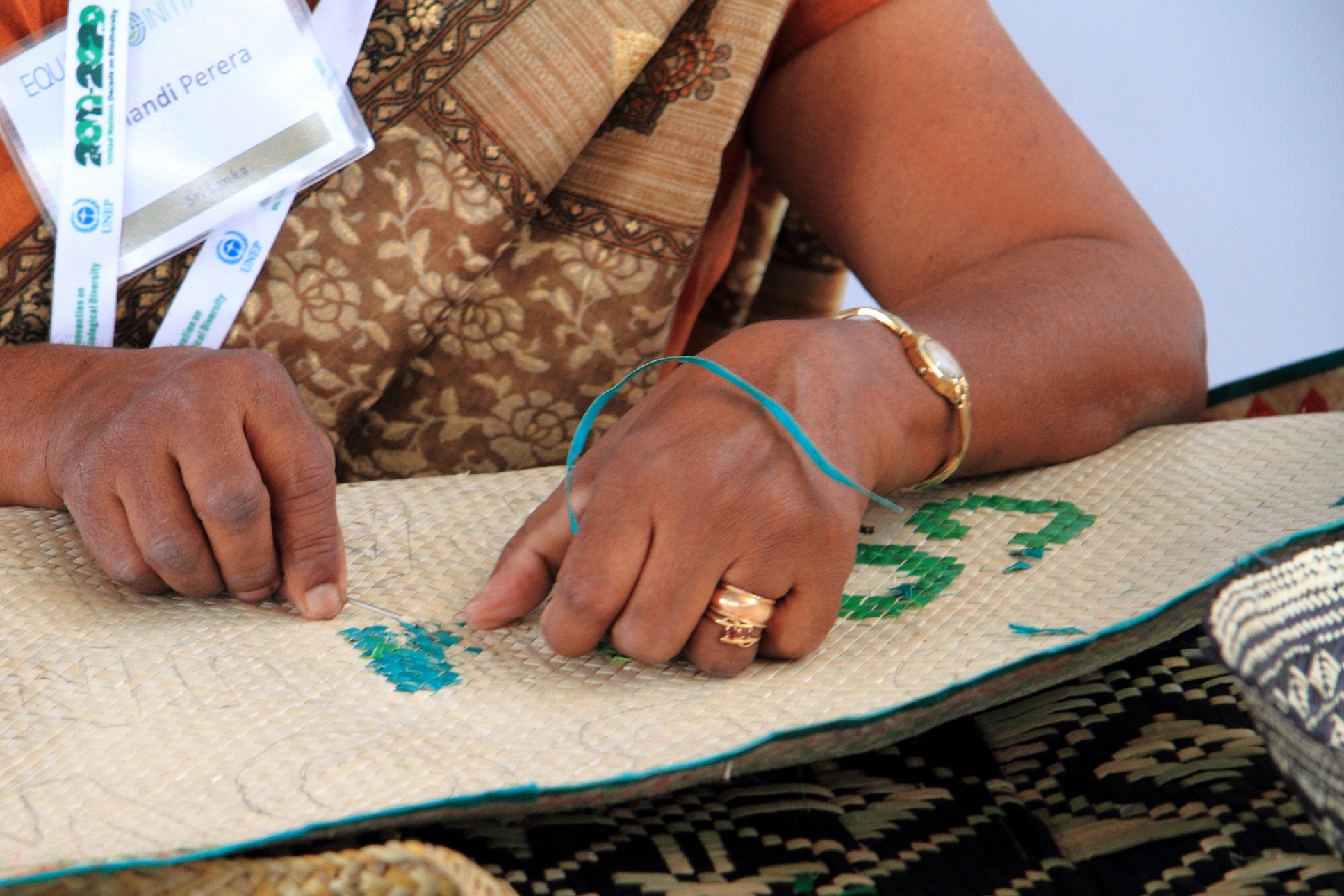 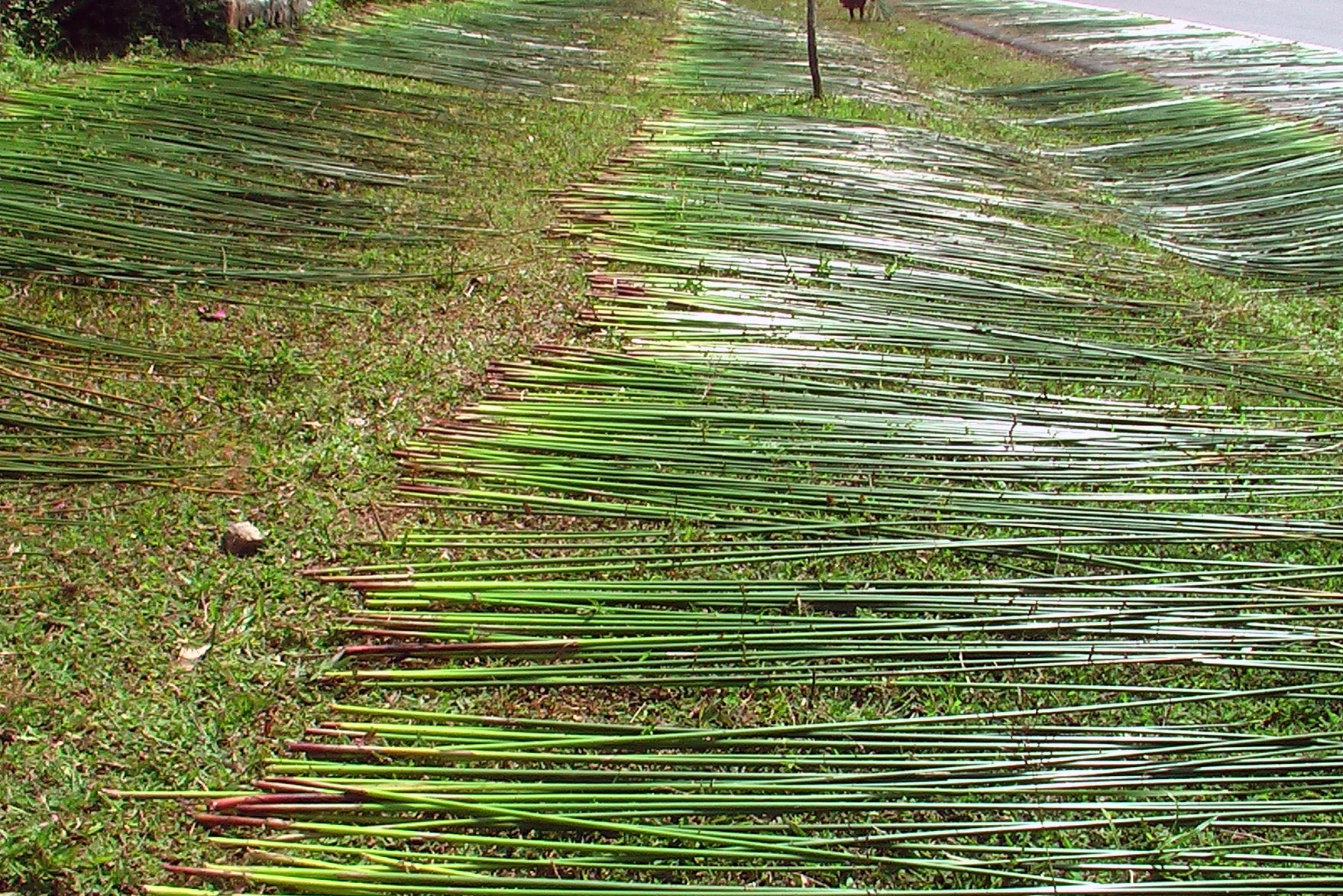 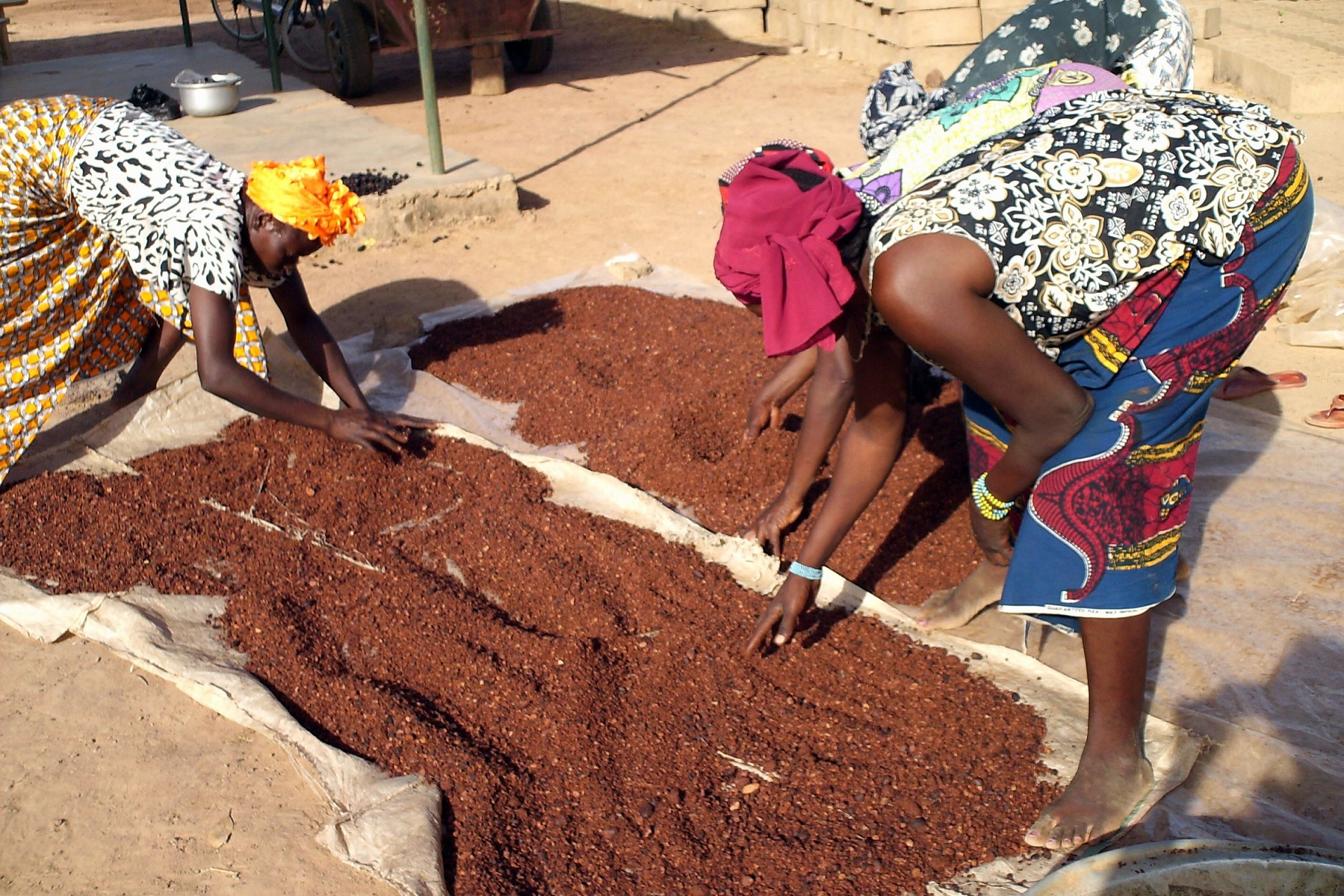 This morning side-event was co-organized by UNDP and the International Partnership for the Satoyama Initiative (IPSI), and explored the theme of resilience in the context of community-based action for development and the environment. The event served as the fourth of the Community Palli’s thematic workshops, featuring presentations from Equator Prize winners working in Sri Lanka, Burkina Faso, and Indonesia, and helped to illuminate the satoyama concept of ‘socio-ecological production landscapes and seascapes’ following the Third IPSI Global Conference. Fumiko Fukuoka, Senior Technical Advisor at UNDP, and Wataru Suzuki, Deputy Director of the IPSI Secretariat (United Nations University Institute of Advanced Studies, UNU-IAS) opened the session, and introduced Professor Alfred Yeboah of the Ghana National Biodiversity Committee. Professor Yeboah congratulated the presenters on their work, remarking that while governments devise strategies and plans, ultimately it is at the community level that biodiversity conservation is realized – this is what underpins the ability of local communities to recover from shocks and disturbances.

The first example of community-led resilience came from the Philippines, as Florence Daguitan of the Indigenous Peoples’ International Center for Policy Research and Education (Tebtebba) described the management of indigenous territories in the Cordillera. Communities have sustainably conserved this land for centuries, using rotational harvest techniques and practising more than 25 traditional craft occupations that conserve forest and key watersheds. Despite this, these indigenous territories are under threat from proposed hydroelectric dam projects and commercial vegetable production. Ms. Daguitan recommended that holistic development processes must include all relevant stakeholders, including local communities.

These same traits are also reflected in many recipients of Small Grants Programme (SGP) grants, as Prabhjot Sodhi, National Coordinator of GEF-SGP India, noted. Mr. Sodhi talked about how grantees integrate all ages, genders and religions in projects, and how many initiatives have taken the lead in facilitating village-level negotiations. Discussant Dr. Pablo Eyzaguirre (Bioversity International) noted that many of the initiatives discussed have been successful in the face of policies that aim to sever the ties between people and their land. He also noted that research into conservation, as in the case of Songtaab-Yalgré, is often initiated by local communities. Such contributions need to be recognised.

Other initiatives presented during the side-event dealt with similar issues: Green Senegal (represented by Vore Gana Seck) promotes food security through sustainable agriculture and environmental protection in Thiès, Senegal; the Community-based Marine Management Foundation (represented by Cliff Marlessy) has effected wide-scale change throughout eastern Indonesia, working through conservation, livelihoods, and environmental education programming in a number of coastal sites to demonstrate the effectiveness of local marine resource management; and the Rush and Reed Conservation and Diversification Program (represented by Piyasoma Bentota) has trained thousands of artisans in making fine handicrafts from indigenous rush and reed varieties in post-conflict Sri Lanka.

All of these groups have demonstrated resilience in the face of environmental, social, or economic shocks. Akane Minohara of UNU-IAS spoke about rebuilding, restoration and revitalization of coastal areas in northern Japan since the March 2011 earthquake. Multi-stakeholder participation has helped manage the ecological landscape in ways that benefit both nature and residents. Dr. Eyzaguirre closed the session by reemphasizing the role of communities in building social and landscape resilience, and reiterating the need to set local community action in the context of global issues. The real wealth of these communities is not measured in monetary terms, but in human and social capital.

Local Communities and the CBD

The Community Palli hosted a lunchtime side-event focused on the role of indigenous and local communities (ILCs) in CBD processes. Viviana Figueroa of the CBD and Eileen de Ravin of the Equator Initiative introduced the session, which featured contributions from Santiago Obispo (General Coordinator, Red de Cooperación Amazónica – REDCAM, Venezuela), Gladman Chibememe (Chibememe Earth Healing Association (CHIEHA), Zimbabwe), and Dr. Kent Nnadozie (Senior Treaty Officer, International Treaty on Plant and Genetic Resources for Food and Agriculture, or ITPGRFA, FAO). Among other issues, the speakers described the evolution of the role of ILCs in the CBD, including funding dedicated to the participation of ILC representatives in regional workshops and CBD CoPs.

Biocultural Heritage: From Concept to Practice. New policy instruments for times of uncertainty and change

This session presented lessons learned and policy tools for conserving biocultural heritage, based on studies conducted with eleven ethnic groups in countries around the world during the past five years. Krystyna Swiderska (IIED) introduced this program of work, which has comprised studies in China, India, Peru, Panama, and Kenya. She introduced a webpage containing links to written and visual material summarizing these five cases, and which presents recommendations for better conserving biocultural heritage in tandem with local and indigenous communities.

One of these cases comes from the communities of Lepcha and Limbu in the sub-division of Kalimpong, in Darjeeling, West Bengal state. Ruchi Pant (Ecoserve) presented the findings of a recent study, Heritage on the Edge: Protecting Traditional Knowledge and Genetic Resources in the Eastern Himalayas, India where the concept of biocultural heritage has been enthusiastically embraced as a tool in the communities’ wider political struggle for statehood. Although supported in the Indian constitution, customary laws do not receive recognition from either State or central judiciaries – proving long-term usage or custom has been a challenge. Customary laws therefore only provide affirmative or positive protection of biocultural heritage. The case of the Lepcha and Limbu communities provided an example of the need for defensive legal mechanisms, such as the development of biocultural protocols. The communities are actively involved in developing these instruments, including transboundary protocols involving communities in China, Bhutan, and Nepal. The initiative has also developed Geographical Indications for use in proving the geographical origin of products sold by the communities. This has been trialed in the production of Darjeeling Tea and Navara Rice, and has proven successful in providing a price premium, improving livelihood opportunities, and incentivizing the conservation of local biocultural heritage.

Peter Munyi, formerly of the International Centre of Insect Physiology and Ecology (icipe), presented parallel lessons learned from protecting the rights of both Maasai and Mijikenda traditional healers in Kenya, whose traditional knowledge is dependent on spiritual values, access to sacred sites, and use of biodiversity. This traditional knowledge is being eroded, however, and is not sufficiently protected by Kenyan laws.

Finally, Ms. Swiderska presented a third case study from Peru, where Quechua groups in the Andes have had success in collective marketing of locally-produced goods. One such initiative is centred on the Potato Park in Pisaq, Cusco, in the Sacred Valley of the Incas, which comprises 25 million hectares and the titled territories of six communities. The area contains a large number of domesticated and wild potato varieties: with more than 2,000 varieties, the park is home to the highest number of wild potatoes in the world. Supported by Asociación ANDES, different groups of local producers have developed a collective trademark that verifies the origin of their products. When regulations proved an obstacle to registering this trademark with the Peruvian intellectual property rights authority, however, the indigenous communities developed a proposal for an alternative to Geographic Indications – a “Biocultural Indication” – that is better suited to community-based enterprises, and serves to assign appropriate value to their biocultural heritage. This innovation, along with many others arising from experiences in the five countries in this study, represents a transferable solution to the challenges of conserving biocultural heritage for the benefit of local communities around the world. 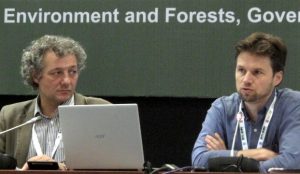 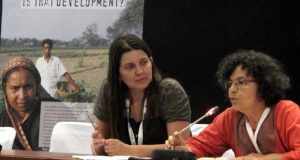 The final session of the day – and of the first week of CoP – focused on the practical applications of Access and Benefit Sharing (ABS) at the local level. Following the adoption of the Nagoya Protocol on ABS at CBD CoP-10 in Japan, 2010, new opportunities are likely to emerge for communities to benefit from their roles as custodians of genetic resources and holders of traditional knowledge. To prepare and respond to these new opportunities (and challenges), a new partnership was recently established between the ABS Capacity Development Initiative (a multi-donor initiative implemented by GIZ), the GEF Small Grants Programme (SGP) implemented by UNDP, and the NGO Natural Justice, with each organization contributing their unique sets of expertise and networks.

Equator Prize winners Pacari Network of Brazil (represented by Lourdes Laureano) and Muliru Farmers Conservation Group of Kenya (represented by James Ligare) both spoke as part of a panel discussion, presenting on their respective organizations’ experiences in cultivating and processing medicinal plants for commercial purposes.

Remarks were also made by the UNDP focal point on ABS issues, Santiago Carrizosa, and Suhel al-Janabi, representing GIZ and the ABS Capacity Development Initiative. Natural Justice was represented by Johanna von Braun, who presented on the development of Biocultural Community Protocols (BCPs) as a proactive measure for local communities to engage with a range of external parties, including bio-prospectors under the ABS framework, and as part of payments for ecosystem services such as REDD+.

Terence Hay-Edie of the GEF Small Grants Programme presented on a number of concrete opportunities for local ABS engagement through the GEF SGP implemented by UNDP. Other local perspectives came from the Guna Yala initiative (Panama), and Sambandh (India). Over 90 participants attended the event; participants included key government ABS negotiators from the African block, Bhutan, and from the Cook Islands and the Federated States of Micronesia.

Access and Benefit Sharing (ABS): Exploring Past Experiences and Future Opportunities for Indigenous Peoples and Local Communities Through New Synergies and Partnerships