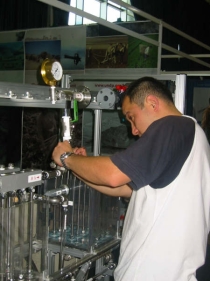 The second day at the Community Vilaj addressed substantive issues on the SIDS Mauritius 2005 agenda and continued the sharing of knowledge and experiences between community participants that began in earnest yesterday. Full photographic coverage of Day Two at the Community Vilaj can be found in the daily Photo Diary.

The morning session began with a discussion of the document which, in many ways, brought the diverse group of community participants together in the Vilaj - the SIDS Programme of Action, also known as the Barbados Programme of Action or BPaA.

Dr. Albert Deterville, Executive Chairperson, Indigenous People of Saint Lucia, raised several issues with the BPoA, as a document, that he felt might be of concern to communities. For instance, he raised the concern - from a Caribbean perspective - that the document might not sufficiently reflect some key needs of the Caribbean island states.

Alejandra Pero and Allison Drayton (UN) shared the global perspective on the Programme of Action. They said that 70 % of the document is already agreed to and that work will continue, in wide consultation with stakeholders, to finalize the document.

It was noted that Gordon Bispham, from the Civil Society Forum, has been following up on the process of delivering the Programme of Action since 1994. It was noted that at previous meetings, in the Bahamas for example, there was considerable consultation between government and civil society on the draft to ensure incorporation of community views. It was also recognized that work still needed to be done to accommodate different interests and new emerging issues. 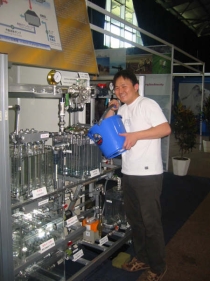 Some of the issues that were raised from the discussion include: 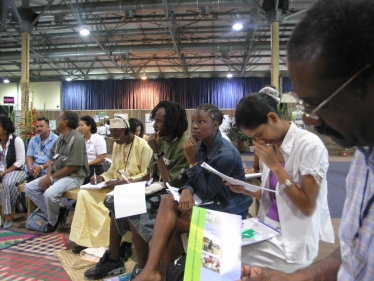 Jane Cook, from PNG, noted that those most affected by SIDS issues are not able to participate. She termed this the "silence of the sufferers".

Esther Mwangi, a Community Vilaj facilitator from Kenya, stated that an action plan was needed and that young people should encouraged to bring in their perspective, as it was likely to be very different from that held by others.

The morning session concluded with a series of breakout sessions to analyze in groups the strengths and weaknesses of the BPoA Document. The focus for these breakout discussions was the question - How can the Programme have international relevance while still truly benefiting, and reflecting the needs of, communities?

Main Strengths of the Programme of Action: 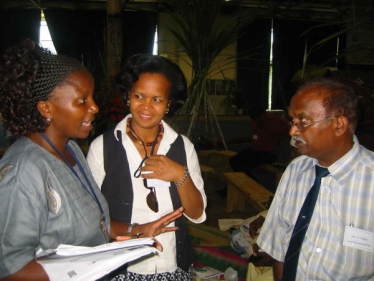 Following lunch, community participants in the Vilaj were treated to presentation by Will Maheia and Celia Mahung from Belize's Toledo Institute for Development and Environment (TIDE). They spoke about TIDE's work to manatees, and how they manage to protect and preserve an endangered species through community involvement. They also talked about their relationships with national, regional and international organizations and their ongoing efforts to influence policies and change patterns of decision making. Will and Celia concluded by describing how they had brought four countries together through the TRIGO organization and how they have developed comprehensive educational and community organizing techniques to teach fishermen about biology and ecosystem ecology and even include them in research.

"Forget about the environment if people haven't got food on the table"
-Will Maheia, TIDE - Belize

The presentation by TIDE was followed by intense breakout discussions around common experiences shared in similar areas by community participants. The main messages arising from these talks were:

Community Vilaj Message on the SIDS Programme of Action