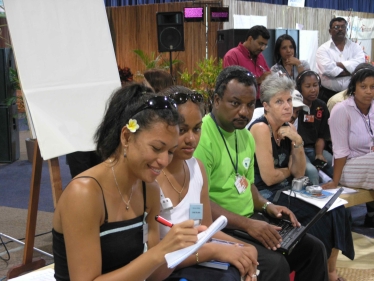 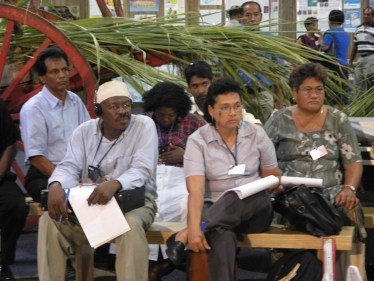 Day Four at the Community Vilaj coincided with the opening day of the official SIDS Mauritius 2005 meeting. During the morning session at the Vilaj, participants traveled to the Swami Vivekanada Convention Centre in Les Pailles to register for the Official Conference and its side events. The participants were met at Les Pailles by Diane Quarless, of the United Nation's Department of Economic and Social Affairs (DESA), for an informational overview of the conference agenda and protocol. Following this briefing, the participants were given a fascinating tour of the main conference venue. Full photographic coverage of Day Four, including images from the main conference site can be seen in the Community Vilaj Photo Dairy.

This presentation outlined the methodology of used by the Taporoporoaanga Ipukarea Society to connect local people. This involves three critical components:

The discussion that followed the presentation generated considerable conversation. In the course of a heartfelt dialogue, the following points were raised as being of special importance:

Ms. Smedler noted that the Community Vilaj has a special place in her heart as it is at the level of the people that most likes to work. The Resident Coordinator reiterated her support for community issues and highlighted the fact that it was important to ensure that governments implement policies that are in the interest of the civil society and local people. Further, said Smedler, sustainable development is not only about the environment! Rather it also includes social and economic issues and human rights and cultural concerns as well. In her conclusion, she asked the Vilaj participants to keep in mind that the MDGs are not only academic issues. Communities are essential to giving the MDGs a pulse, a heartbeat and a human face.

The close of the day was marked by words from a community participant from Somoa who offered the thanks of the group to Ms. Smedler and the UNDP team for facilitating the Community Vilaj experience.

During the morning session, Vilaj participants drove to Swami Vivekanada Convention Centre in Les Pailles to register for the Official Conference and its side events. The participants were then met by Diane Quarless of UN DESA for an informational overview of the conference agenda and protocol and were given a tour of the main area.

In the afternoon session Melinda Pierre and Nancy Kareroa of the Taporoporoaanga Ipukarea Society, presented to the Community Vilaj the ‘UNESCO's Small Island Voice Project: Island Memories - Cooks Islands.' Small Island Voice started in 2002 with the aim to link up islanders from the Caribbean, Indian Ocean and Pacific regions to advance sustainable island development.

At the end of the presentation participants raised important questions and made significant comments. Among other things, participants asked for:

Participants were then told about the opening of the Conference at Les Pailles on Monday morning. Due to the limited number of places to 250, participants were advised to attend the Major Groups Room at 9:00 to be able to attend the Conference. The Major Groups were allowed to participate on the 5 Panel Discussions to happen over the next few days. The Villaj participation, however, is still to be determined - the participants agreed there was no need to abandon the Community Vilaj, though seats were available at Pailles.

On behalf of the Samoa Civil Society & Community, a participant from Samoa extended thanks to UNDP for having facilitated their participation to the conference. The day closed with a decision to leave the CSF closing ceremony which would allow for some time to re-organize the space for the HIV AIDS events.