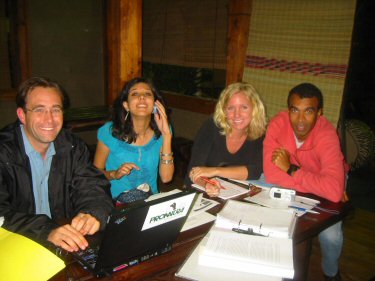 September 8th - Today is the Opening Day of the Community Park at the Vth World Parks Congress in Durban South Africa. The Community Park, which is located in the heart of the Durban Exhibition Centre, is dedicated to creating opportunities to spotlight stories from grassroots sustainable development victories won by community level action around the world and to encourage dialogue about future challenges for protected areas. At the centre of the Park, a community dialogue space exists to facilitate group (community-to-community) discussions, presentations, press conferences and media interaction. Around the outside, a few smaller huts and spaces serve as informal meeting areas to encourage community exchanges and partnership building.

An Opening Ceremony was held this morning to inaugurate this very special space. Participants were welcomed into the Community Park by the beautiful songs of a local choir composed of disabled youth South African youth. The proceeds from their performances are used to purchase musical instruments and equipment. Bahar Dutt, a member of the Community Park ' s facilitation team welcomed everyone to the Park and reminded the community members that this was their space, a space dedicated to advancing their agenda and facilitating the integration of local voices into global policy discussions.

The Nature Conservancy ' s Jason Spensley, another facilitator at the Park, invited a local Spiritual Leader, Karel Kleiman, to bless the Community Park and officially declare the Park open. Kleiman is a descendent of the original inhabitants of South Africa and has a special appreciation for the earth, animals and people of Southern Africa. In order to bless the site, a special South African herb is burned and, according to the manner in which the smoke turns, the site is declared is free of malicious spirits and ready for public use and enjoyment. Kleiman proceeded with the ceremony and blessed the site. He also expressed his gratitude at being invited to open such an innovative and special area and extended his very best wishes to the participants.

The opening ceremony continued with a short introduction from Benson Venegas, a member of the Community Park ' s facilitation team, who highlighted the fact that communities are the driving force of sustainable development and that this space is devoted to sharing knowledge, building partnerships and informing policy.

A community-building game followed the facilitators ' presentations which consisted of various community members introducing themselves and stating their expectations for the Congress and the Park.

Lucy Mulenkei, Director of the Indigenous Information Network, stated that " Being in this World Parks Congress is both a challenge and opportunity for us as Indigenous Peoples. The discussions that have just begun are of fundamental importance to us. The results of our struggles are beginning to be felt, and different speeches by world leaders in conservation have recognised the centrality of our roles. Our work and collaboration with our brothers and sisters from the mobile and nomadic peoples has given us renewed strength through solidarity " .

Boku, a community member from Ethiopia, expressed his expectations by stating that he hoped that the issues, problems and needs of Mobile Peoples would be well articulated and integrated into the discussions. Mohamed, from Morocco, mentioned the he was very enthusiastic to participate in the Congress and the Park and was looking forward to sharing his experiences and hearing from others. He wished everyone success over the next couple of weeks.

During the opening discussions, it was mentioned that, in preparation for the Congress, numerous groups had held Preparatory Meetings to compile their objectives and draft statements that summarize their vision for the Congress. Indigenous Peoples , Mobile Peoples and the South African Community Members Group all drafted such declarations and gave short presentations summarizing their statements. The groups highlighted the fact that over the past ten years there have many achievements with regard to land reclamation and government support. They support the Durban Accord but feel that issues such as land rights and tenure, the on-going conflict between communities and conservation agencies, the unequal distribution of the benefits associated with protected areas and the need for community capacity building must be addressed further.

Jason Spensley reiterated that communities are driving conservation and are contributing to the realisation of the Millennium Development Goals while Sean Southey, Manager of the Equator Initiative (a co-organizer ' s of the Community Park), gave a short presentation highlighting the fact that there are many people at the World Parks Congress that want to hear from communities. He also noted that, to ensure that the Community Park is an innovative concept that will facilitate local to global discussion and help ensure that community voices are heard at the highest level. Southey concluded by highlighting the huge successes in sustainable development around the world that take their origins in communities and noted that, just as the Community Park sits at the heart of the Exhibition Centre, community members sit at the heart of sustainable development.

The official Opening Ceremony for the Vth World Parks Congress commenced later on in the afternoon and was graced with the presence of former South African President and Nobel Prize Winner, Nelson Mandela, Queen Noor of Jordan and South African President Thabo Mbeki. All three gave stirring and inspirational speeches regarding the state of the world ' s natural heritage and the importance of conserving it. Throughout the evening, many references were made to the importance of the people affected by the establishment of protected areas especially indigenous people and youth.