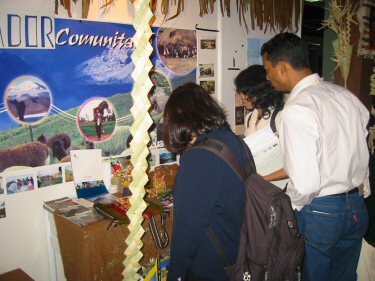 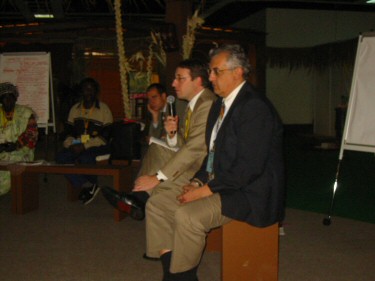 Beginning the day by opening the last round of community presentations, Miguel Garcia and Oscar Jimenez spoke on behalf of the Fundacio Pro Reserva Forestal Monte Alto in Costa Rica. Their organization began in 1992 and works to preserve biodiversity through a variety of activities including education initiatives, ecotourism, and strategic land purchases.

Chief Edwin Ogar and Juliet Olory spoke next on behalf of the Ekuri Initiative in Nigeria. Working with community owned land, the group harvests non-timber products. By marketing these products at the nearby market the groups has been able to make significant improvements in the villages and increase income.

Maritza del Carmen Parra and Sergio Arcila went next speaking on behalf of the Red de Mujeres Productoras. This group is a bio-corporate initiative located on the Pacific coast of Columbia. Beginning with the drive of five women who sought to trade medicinal plants, production in owned and operated by local families and the plants are harvested using sustainable methods. Family incomes have increased and the marketing plan has been utilized in others areas.

The last community group to present. Alexandra Apolinario and Oscar Pihuave spoke on behalf of their home initiative in Ecuador, Junta de Manejo Participativo Pesquero. Striving to limit the exploitation of coastal resources, they have worked cooperatively with local government to protect marine species and further exploitation of the coastline.

Many people used the day to engage with the activities of the rest of the COP7 and invite their country delegates to the Equator Award Dinner that will take place Thursday night.

Returning in the late afternoon, the group welcomed Achim Steiner of the IUCN and Alvaro Umana of the UNDP to launch a new IUCN/UNDP publication entitled "Biodiversity and the Millennium Development Goals." Addressing such issues of how biodiversity can help eradicate poverty and combat health emergencies, the first copies of the book were handed out to community members. A lively discussion followed that covered many topics including how the language of international organizations excludes a broad audience. Additionally community members wondered how similar information that they have retained can be disseminated to a larger audience.