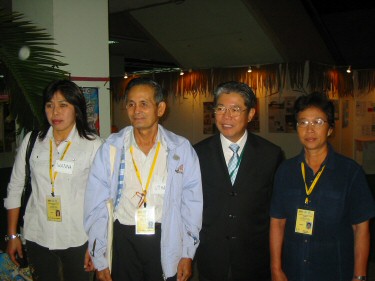 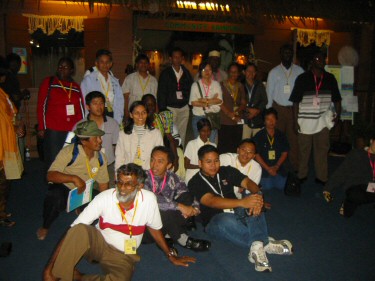 Meeting in the morning to do one last rehearsal of the community declaration and unity dance the group awaited the evening with nervous anticipation. Delivering the five parts of the declaration that resulted from the working groups, Ana Lucy, Juliet, Donato, Gladman, and Rukmikini have special roles in the upcoming dinner. After a successful run through the group was given the afternoon to invite any last minute guests and prepare for the evening.

Hundreds of people gathered in the reception area around 6:30 and began having drinks. Opening the doors around 7:00, dinner guests began trickling in while the community members waited back stage. Before launching directly into the evenings speakers, the crowd was welcomed with a dance performance by the Akar Umbi and a video of the work of the Equator Initiative. Achim Steiner, Director-General of the IUCN gave welcome remarks and the finalists were introduced and welcomed to take their seats of honor in the front of the dinner hall.

Alvaro Umana, Leader of the Environment and Energy Group for the UNDP, delivered an inspirational keynote address as people were served the main meat course of the 10 course Chinese dinner that had been prepared for the evening. The Mah Meri dance troup provided a brief intermission as people dined. Charles McNeill of the UNDP, the Master of Ceremony, then took the stage to awards the certificates of achievement to the community members.

The Honorable Data' Seri Law Hieng Din, Minister of Science Technology and Environment for Malaysia took the stage with Dr. Hamdallah Zedan, Executive Secretary of the CBD spoke a few words as they joined in the presenting of the certificates. Energy livened up the ballroom as excited finalists took the stage. The community declaration was delivered flawlessly and proved to be a highlight of the evening. The unity dance of the finalist showed their commitment to each other and their collective cause regardless of who will be awarded the seven Equator Prizes.

Speaking on behalf of the Jury, Professor A.H. Zakri gave a brief introduction to the process of picking finalist and the eventual winners and introduced other members of the jury who were unable to be present for the awards dinner. Nicol David, UNDP National Goodwill Ambassador then took the stage in order to announce the winners. Although it was bitter sweet for the community members who have spent the past weeks preparing for this night and participating in the COP, the excitement expressed by the winners was electric as all attendees to the dinner joined in celebrating the achievements of the seven winners.

Benson Venegas of the Talamanca Initiative in Costa Rica reflected on his experiences of the past two years as a Equator Prize Laureate. People quietly listened to his touching speech and cheered on as the torch was passed to all the finalists as they joined Benson on the stage. Music and dancing ensued as people celebrated yet another successful awards ceremony in honor of the hard work and dedication of local groups throughout the world.