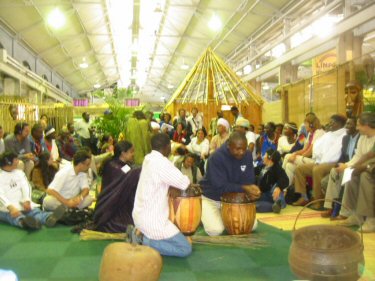 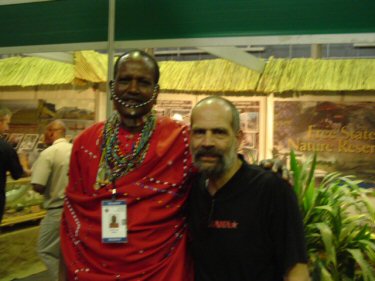 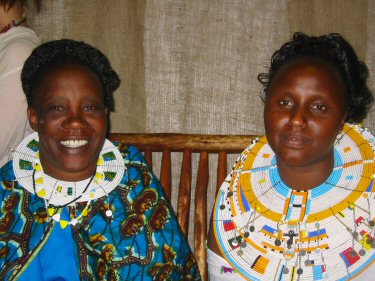 The second day of activities at the Community Park a diverse array of presentations from local sustainable development practitioners from around the world. Notably, the day included presentations and discussions led by three representatives of Equator Prize-winning communities share their experiences with reducing poverty while also protecting the environment in or around protected areas.

Wil Maheia from the TIDE Foundation, Belize, expressed how they had been working to help local fishermen in Belize's poorest region. TIDE has been able to raises incomes substantially, while reducing the poaching of endangered manatees and illegal hunting and logging in this area. From the Fiji Locally-Manged Marine Area Network, Ratu Pio Radikedike shared how his organization has grown to protect over 10% ot Fiji's inshore marine areas while at the same increasing the income of Fishers. Said Radikedike of his organization's remarkable successes, "We are going back to the way our Grand Fathers used to fish".

In his presentation, Benson Venegas, from Costa Rica's Talmanca Initiative, expressed the idea that there is a strong connection between poverty, hunger and biodiversity. In concluding his presentation on the Talamanca Intiative's work, he invited all participating local groups to submit nominations for the Equator Prize 2004 before the October 5th deadline.

Day Two at the Community Park also saw enthusiastic members of RARE Center (Megan Hill, Paul Butler, Maureen Cunningham and Rafael Manzanero), present incredible popular Flamingo Puppet Show. Mr. Manzanero told the audience that the Yucatan Peninsula of Mexico is the home of the Caribbean Flamingo featured in the show. He also noted that garbage and trash are the primary threats to this species and that the modification of individual behaviour can make a big difference in determining whether this and other species survive. The puppet show highlighted the plight of the Caribbean Flamingo by telling the story of a family of Flamingos that find themselves in a garbage dump and relizee just how precarious their position as a species is. By working with others they come to better understand what is causing the problems they face and join together with local communities to keep the region cleaner. The puppet show wonderfully told the story facing so many species in a way that caught the attention and imaginations of the participants in Community Park.

The session in the late afternoon of Day Two focused on the rights of local people with regard to protected areas. The session began with a film, called "Rum Business", that featured the Bedouin people of Wadi Rum in Jordan and the ways in wich their mobile (nomadic) way of life has been affected by the growth in tourism. The exceptional film also examined how the rangelands of the Bedouin people had been appropriated for a National Park. The presenter of the film, Sabbah Alzlapiah, said " Before there was only the bedouins and nature, now our place is full of cars and tourists".

The story of the Bedouin's of Wadi Rum was followed a case study, entitled "principles to practice", that showed how local people in Cameroon were displaced due the creation of a National Park. The presenter of this case study, Ernest Adjina, noted that, "the forest rights of the locals were confiscated by conservation officials without their consent".

The afternoon sessions at the Community Park built on these two presentations to focus on the complex intersection of rights and parks. The session was well attended and the comments and deliberations of the participants showed just how pressing and topical this issue is to local people worldwide.