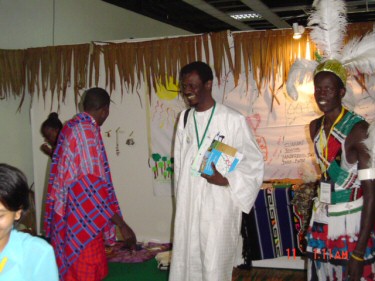 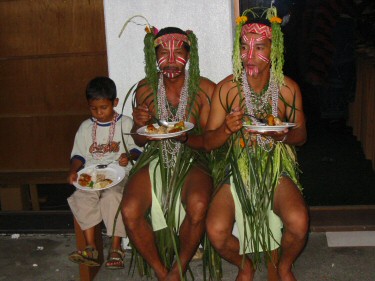 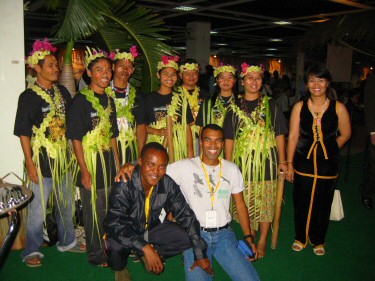 Participants met in the morning to continue their working groups and discussions.

Benny Roman from the Torra Conservancy started the day's presentations with his discussion on the work his organization does in Northwestern Namibia. The Torra Conservancy - an Equator Prize 2004 finalist - manages 352,000 hectares of land in the Kunene region. Working in the areas of sustainable hunting and ecotourism, the group has been successful in generating much additional income for the community. Inviting questions from an Indonesian delegate the discussion included the process that evolves when electing management committees. Additionally, many participants were curious about the level of human/animal conflict and the use of water points for the elephant population.

Isbel Soares de Sousa spoke after Benny as a representative of the Brazilian Equator Prize finalist, Sociedade Civil Mamiraua. This organization has been active in creating two Sustainable Development Reserves in the Central Amazon Conservation Complex west of Manuas, Brazil. 63 communities and scientific researchers work together to developing sustainable logging practices, fish management, and ecotourism. The group started by deciding to take a stand against illegal logging and fishing in the area.

Following these presentations, participants adjourned for lunch. Happily for all, the theme for the day at the Kampung - including for lunch - was Africa!. African participants, such as Zimbabwe's Gladman Chibememe, happily welcomed a return to the cuisine of their homeland.

Following lunch, the discussion continued and addressed many issues surrounding the question of traditional knowledge and how science may be used jointly in the interest of local communities.

Equator Prize finalists, the Rufiji Environment Management Project (REMP) of Tanzania, contributed much to the discussion. Hadija Ngingo and Ismail Said Lusonzo spoke about the ways in which REMP has promoted sustainable use of nearby forests, wildlife and wetlands. Due to the fact that their village is located beside the Selous Game Reserve World Heritage Site, the village has been trying to work collaboratively with local officials in order to manage the wildlife that roam throughout the area. They acknowledge that there is still much work to be done.

Discussion continued as many people attending the lecture spoke on a variety of topics, from the challenges of empowerment to the idea that the poor are often forced to extract a livelihood in unsustainable ways. Delegates argued that in order to alleviate such pressure there must be an emphasis on partnerships as well as an advisory role with governments.

The Indigenous Peoples reception was held in the Community Kampung at 6:30 pm. As a celebration of human diversity, cultural performances included song, dance, and instrumental music. Food was abundant as people enjoyed the performances of groups from regions such as the Malaysian state of Sabah, Arctic Russia, and Canada.