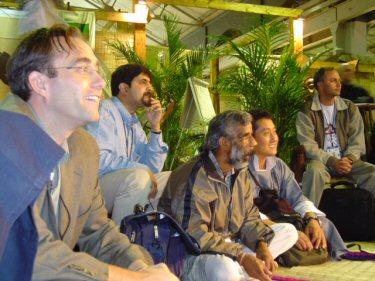 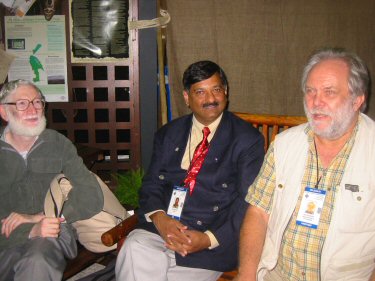 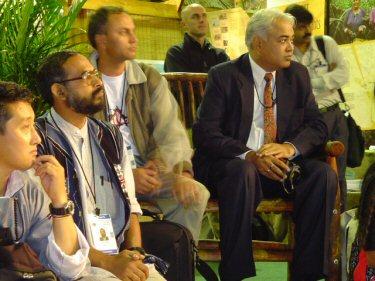 Saturday saw the Community Park open its doors to not only WPC delegates but also members of the general public. The Seka Malambo Drama Group, Zambia drew a broad audience with a repeat of their lively performance of 'Nsendemila' - a story which depicts the need to not only conserve wildlife within protected areas, but also to ensure communities living within and around these protected areas play an integral role in developing these strategies, so that decisions taken benefit rather than negatively impact upon their livelihoods and ways of life.

Seka Malambo's performance was immediately followed by a discussion amongst Community Park participants on the potential benefits that can be gained from the adoption of ecoagriculture - a term which encompasses sustainable agriculture and associated natural resource management strategies that embrace and simultaneously enhance rural livelihoods, agricultural productivity, ecosystem services and biodiversity. Following a brief introduction by Dr Sara Scherr, the Director of Ecoagriculture Partners, Benson Venegas, Executive director of ANAI and an Equator Initiative prizewinner, spoke on the integral roles played by biodiversity conservation, crop diversification and organic agriculture within the sustainable resource management strategies practiced in the Talamanca region of Costa Rica. The debate engaged a mixture of community practitioners already implementing and realizing the benefits of ecoagriculture strategies, as well as individuals with an interest in learning more about the topic of ecoagriculture and the nature of on-going ecoagriculture activities being practiced worldwide.

Saturday afternoon saw the screening of 'In Light Of Reverence: Protecting America's Sacred Lands', followed by a discussion with the producer, Christopher McLeod. Described as a 'wake-up call for everyone who cares about the environment and human rights' (Robert Redford), the documentary highlights the struggle of Native Americans to save sacred sites from being lost to mining, tourism and other forms of land use incompatible with traditional Native American practices. Illustrated with case-studies around the Grand Canyon in Arizona, Devils Tower in Wyoming and Mt. Shasta in northern California, the film movingly depicts the contrast between the views of Native American religious practitioners, reflecting upon the spiritual values of the land, and those of non-Indians intent on capitalizing upon the sites' economic development potential.

On Saturday evening, the Community Park hosted 'A Celebration of Indian Conservation'. For the first time, government officials and community representatives sat together to reflect on what the issues under discussion at the World Parks Congress mean for the people of India. 'The community park has provided an amazing space to bring together Government officials and community people from the same country who would have found it difficult to come together otherwise' said Manisha Sheth Gutman, of Kalpavriksha. The dialogue highlighted the need for inclusive natural resource management strategies and further effort to resolve tensions between parks and people. Ashish Kothari, Co-chair of TILCEPA (Theme on Indigenous and Local Communities, Equity and Protected Areas) emphasized the importance of mutual learning - sharing achievements and lessons learnt from within and beyond India. Whilst it was recognized that India has already made good progress the need for further development of locally-driven solutions was noted, particularly to address issues that are especially pressing in India, such as population pressure. Before a lively reception with folk songs and dancing, discussion drew to a close with Vijay Jardhari, a farmer from the Himalayas, expressing a poignant take home message 'There is unity in diversity and diversity in unity'.

For more information on: