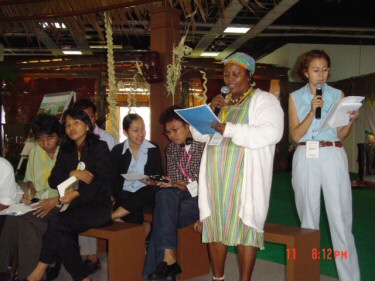 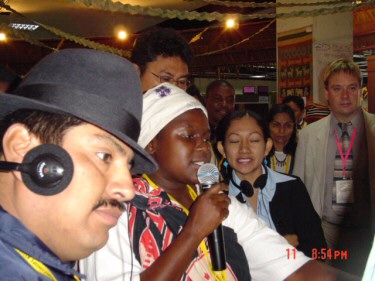 Ana Lucy Bengochea, a representative of the Garifuna Emergency Committee - an Equator Prize 2004 finalist - started the day with a presentation about the work her organization does on the northern coast of Honduras . Although the Emergency Committee originated from the initial activism surrounding Hurricane Mitch in 1998, the group is now involved in many conservation and poverty alleviation activities. Ana Lucy spoke of the effects of social marginalization before launching into a description the group's wider work. Their activities range from the production of goods from coconuts, production of organic fertilizer and pesticide, mitigation of beach erosion, to marketing of other products and services. The group has received support in these efforts from many organizations, including the Huairou Commission.

Gladman Chibememe and Lucia Sithole continued the discussion by presenting their work with the Chibememe Earth Healing Association (CHIEHA). Lucia began with an explanation of the photographs that had been posted in the front of the lecture space and gave a concrete representation of the work of the group and the landscape in which they live. Following Lucia, the charismatic Gladman gave a history of the organization which began in 1998 in an effort to foster the spirit of communal participation. Although the presentation focused on food security, the presenters stressed that the group works in many different fields and with 150 households. In this vein, their work on sustainable agriculture and water harvesting was also presented.

The discussion was opened at the end of the presentations in an effort to address questions relating to innovation and technology. Participants were asked to list what they consider the challenges inherent in current agricultural policy. The following themes were identified:

It was pointed out that farmers need to be compensated for conservation efforts. Additionally, farmers are often unable to discern which seeds are genetically modified and which are not, and further, there is little government support for efforts to avoid the use of genetically modified seeds.

The focus of the dialogue then moved to how these challenges may addressed and overcome. The following ideas were brought to the table:

A representative from the US Department of Agriculture suggested that groups capitalize on the fastest growing sector in the US : organic markets. By taking advantage of a niche market for heirloom and non-modified seeds, many communities could significantly increase their income.

Recognizing that some situations do require a compromise, one participant suggested creating a document to submit to delegates to the CBD.

The discussion. chaired by Patrick Mulvany of ITDG, included many knowledgeable voices in addition to the community participants. Isabella Masinde called for better identification of the problem, community documentation, and transfer of that knowledge. Additionally, a representative of the Swedish government suggested an international convention for the evaluation of new technology. Other voices, such as that of specialist Chee Yoke Ling and Hope Shand addressed how to foster better relationships between active organizations. Ling and Shand were part of a team of researchers that produced a booklet entitled "Towards Better Practice in Protected Areas and Technology Transfer".

To conclude the afternoon session, Francisco Echavarria - of Mexican Equator Prize finalists, the Comunidad Indigena de Neuvo San Juan - presented his group's work in the state of Michoacán. The organization he represents has helped the community develop sustainable agroforestry, create timber products in a sustainable way, and promote ecotourism. Although some audience members criticized the logging practices, Francisco elegantly pointed out that his organization meets the huge global demand for timber products in way that is sustainable and environmentally friendly.

Donato Bumacas representing the KAMICYDI in the Philippeans concluded the day with a photo presentation on his group's broad work in that nation.